By playing on the MAP Nine (IX) of Call of Duty Black Ops 4’s zombie mode, you can unlock two special weapons by following a whole path, namely Death of Orion and Serket’s kiss. If you don’t know how to get these two weapons on map IX, we will explain through this page the step-by-step process that will lead you there.

☆ Note : This step is very important, because it is the pack-a-punch that will transform the Death of Orion gun into Serket’s kiss at the end of the guide.

Another step is just as important to follow this guide, you must complete at least three challenges from one of the arena’s challenge banners to create a cauldron in the middle of the arena on the pillar. These three challenges will also allow you to get a free improved weapon (without pack-a-punch) that does a lot of damage.

You can find out everything about the IX Arena Challenge Banners here : Tip Call of Duty Black Ops 4 how upgrade weapon without pack-a-punch on Map IX (Nine) zombies.

CoD Black Ops 4 Zombies IX the complete guide to getting the Death of Orion and the Serket kiss :

Once the pack-a-punch machine is activated in the temple, you must retrieve two items from the same room as the weapon enhancer. A chain and gear that you can pick up by holding the action button. Simply walk around the room, you will find the chain hanging on a wall in one corner and the gear set on the floor in another corner of the temple. 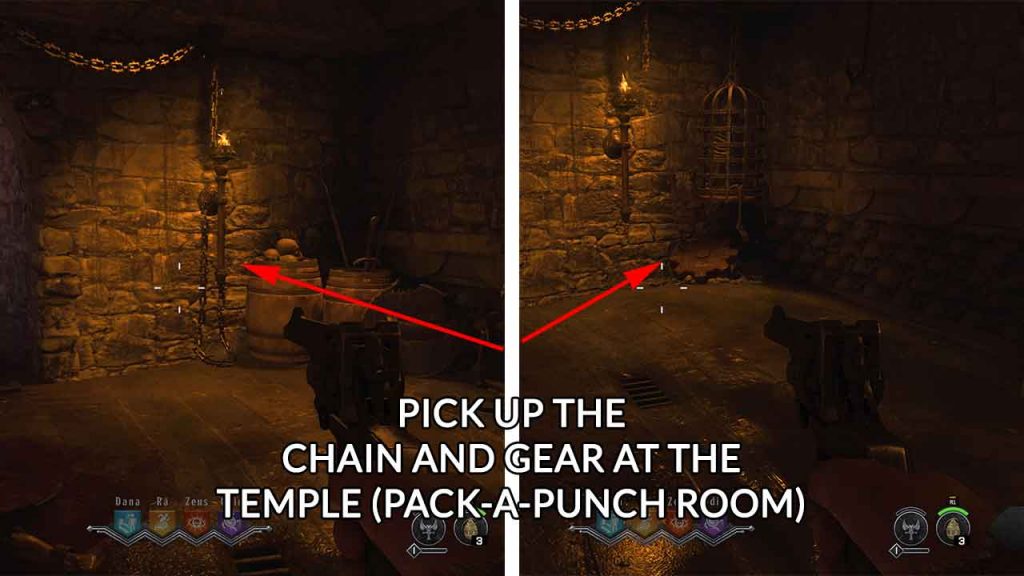 Then leave this place and head towards the entrance of the temple of Danu-Râ. There, you will see a kind of window with hanging torches. You will have to fire your weapon to drop the burning cauldron that can be seen in the background and that is placed on a small pillar. 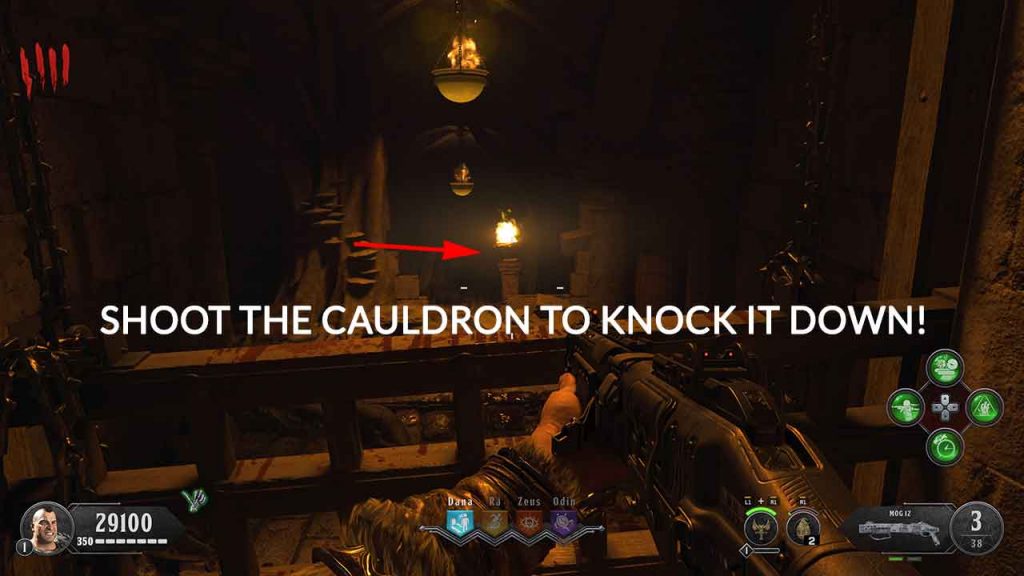 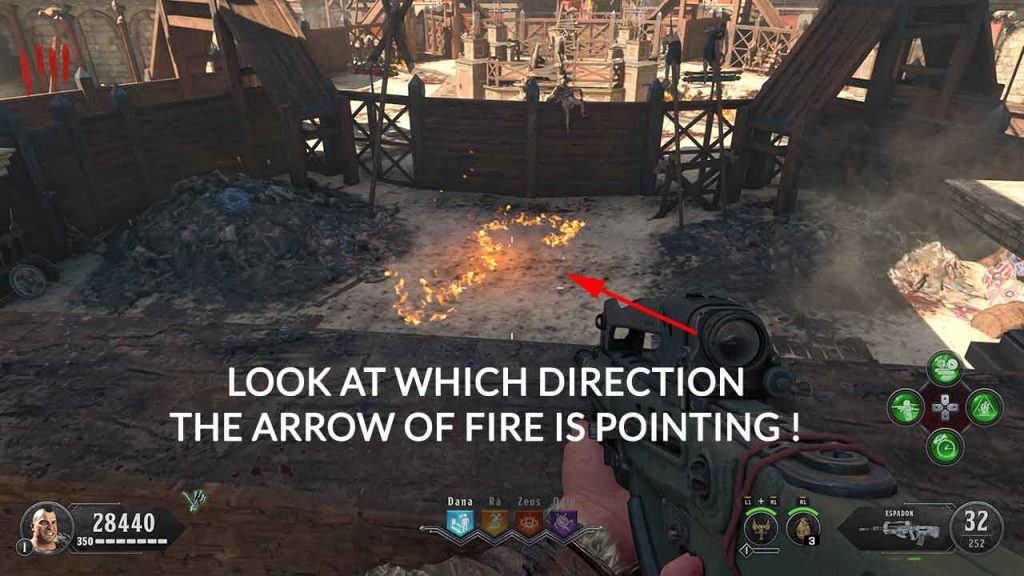 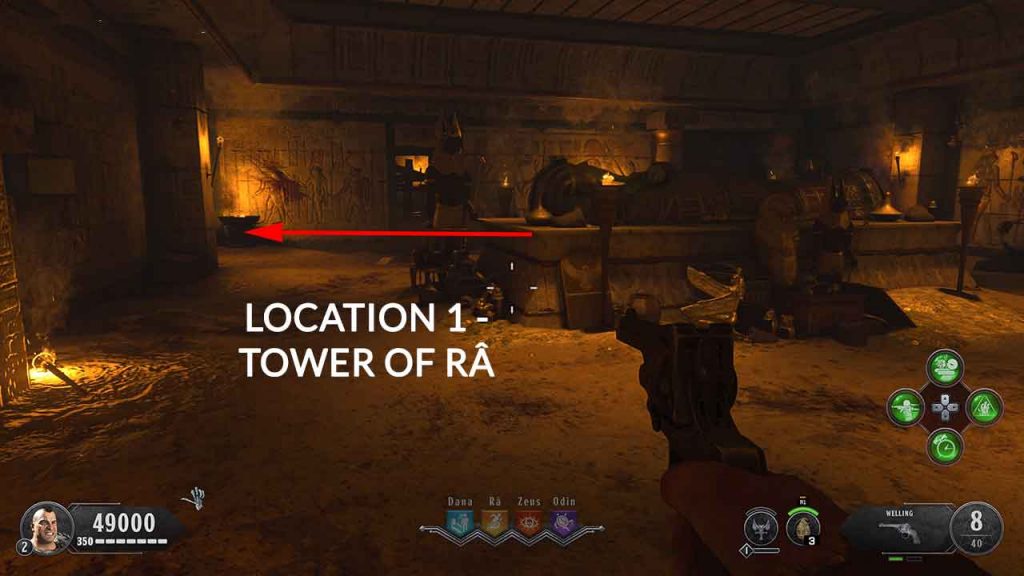 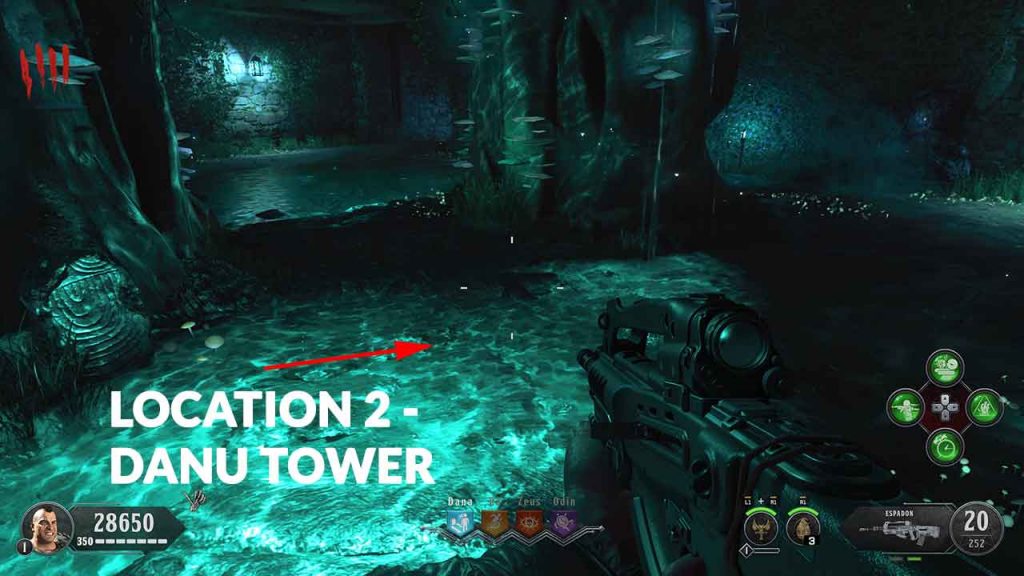 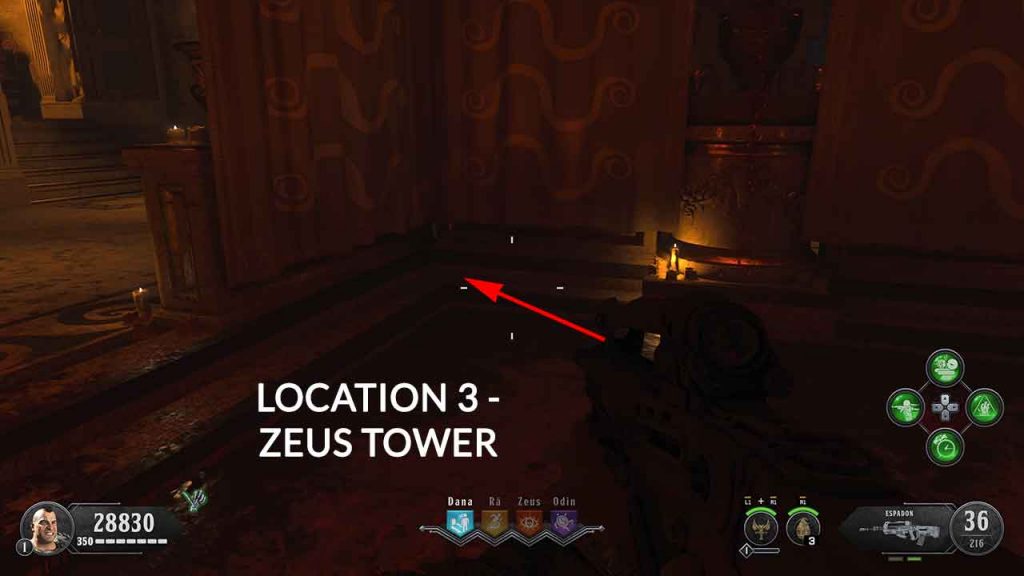 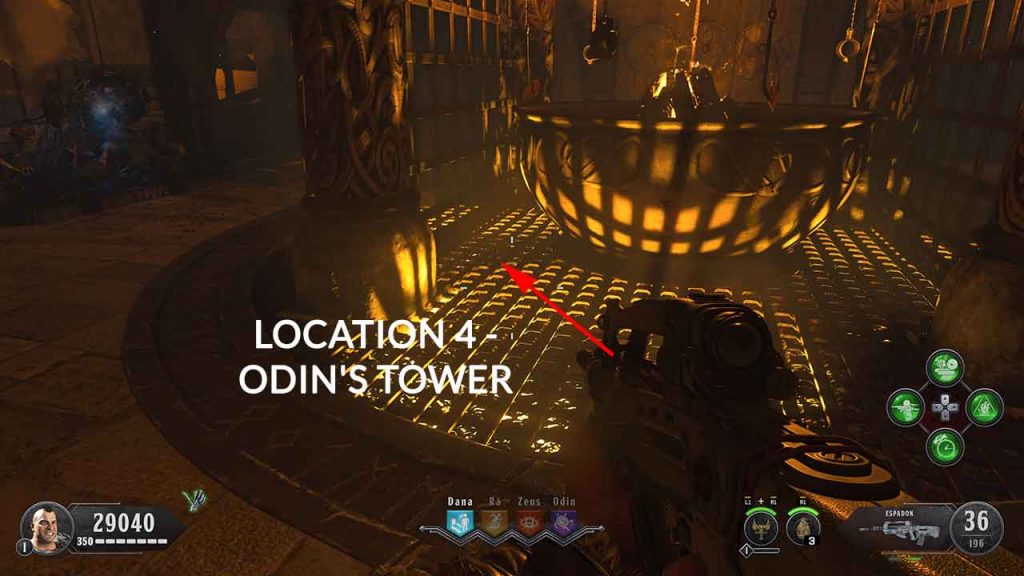 From here, if you have followed our history with the challenge banners at the beginning of the guide, you will see a huge cauldron placed in the center of the arena on the pillar. 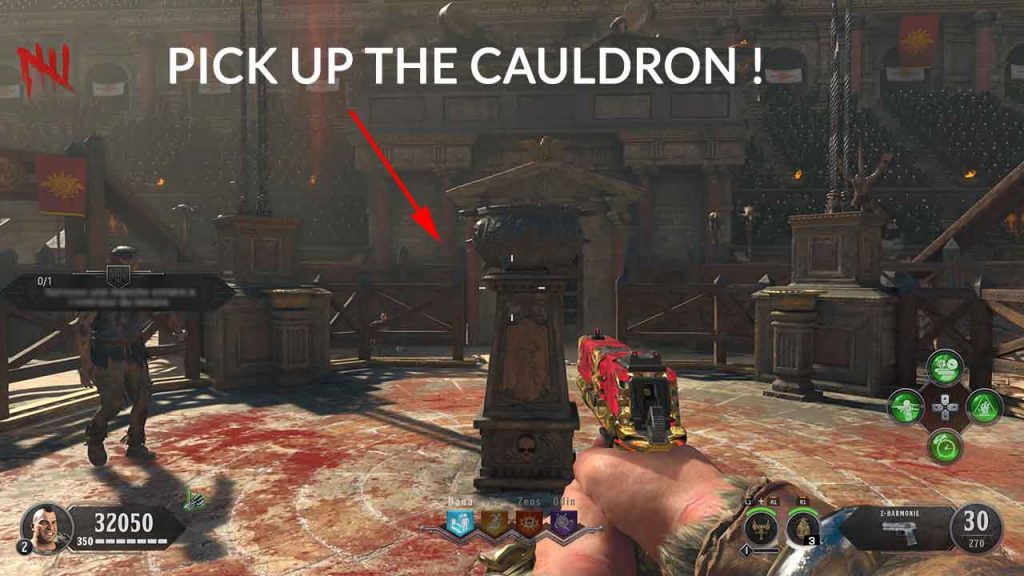 You must pick up this cauldron and then go build the acid trap at the entrance of the Ra tower. You will see on the wall at the entrance a skull and crossbones that will allow you to build the trap. Between the arena alley and the entrance of the Ra tower, you will see a small sewer grid on the ground, here you must place the statue head on the ground while holding the action button. Once the head of the statue is on the ground, all you have to do is activate the acid trap in the same place where you built it by activating the skull and crossbones on the wall.

You will then see the cauldron previously collected in the center of the arena spilled acid on the statue head on the ground which will allow you to recuperate a small sculpture in the shape of a scorpion. 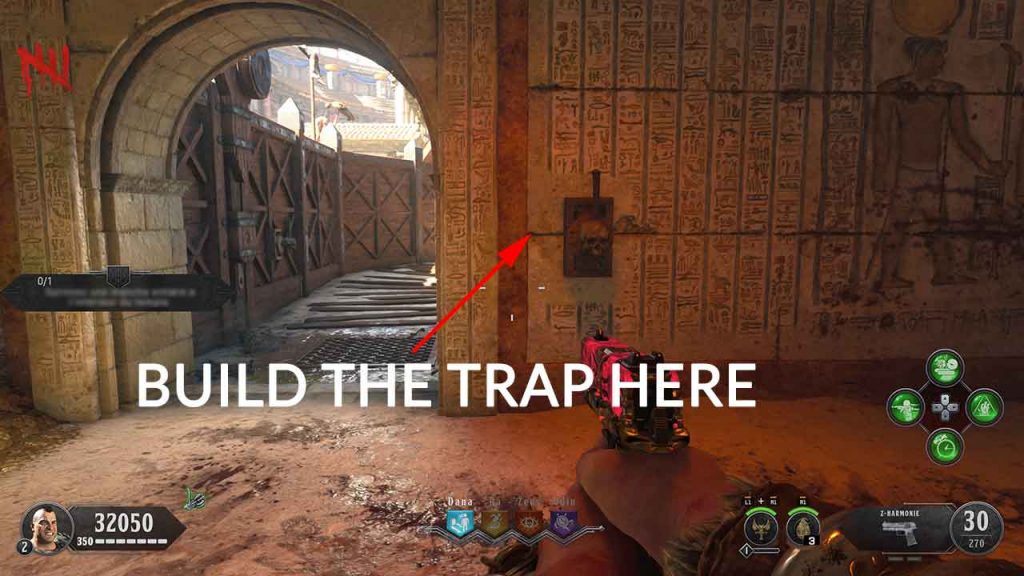 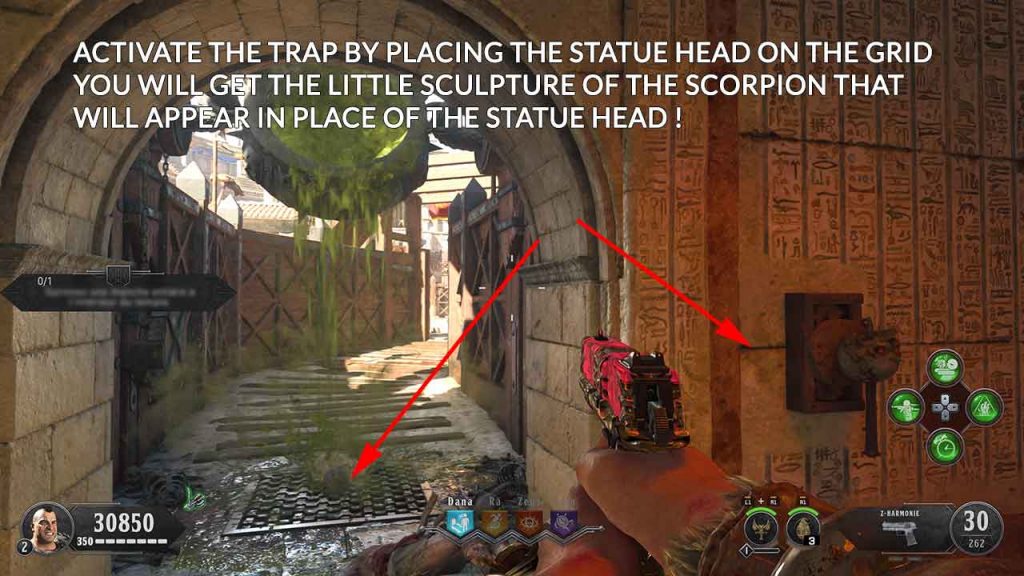 From here on out, it is the most complicated step in the guide. You will have to go to the centre of the arena and hold several rounds until you can increase the crowd’s affinity to the maximum. You can get the crowd’s favour by shooting in the head and knifing kills, enough to make the crowd go wild. Be careful, every time you are hit by the ground fire, your affinity counter goes down !

You can see the public’s affinity very close to your point counter at the bottom left of the screen. If the little skeletal hand has its thumb up, then you can get the crowd to favor you, if it is red and down, you can’t satisfy the crowd.

☆ Tip – whenever you see your earned points appear in green next to your character’s counter, it means that your crowd affinity counter is increasing.

If you can hold a full set with the public’s affinity at its peak in the arena, then the priest will speak up and tell you « this is Serket’s gift ». You will then see an item landing in the pit of the arena, this is the Serket jar that you will have to take with you with the sculpture of the scorpion in the tower of Danu : Arboretum where you will see two trees. One of the two trees has a place where you can put the sculpture of the scorpion. It is then sufficient to place the jar at the foot of the tree to recover the sap from the tree, which is actually poison. 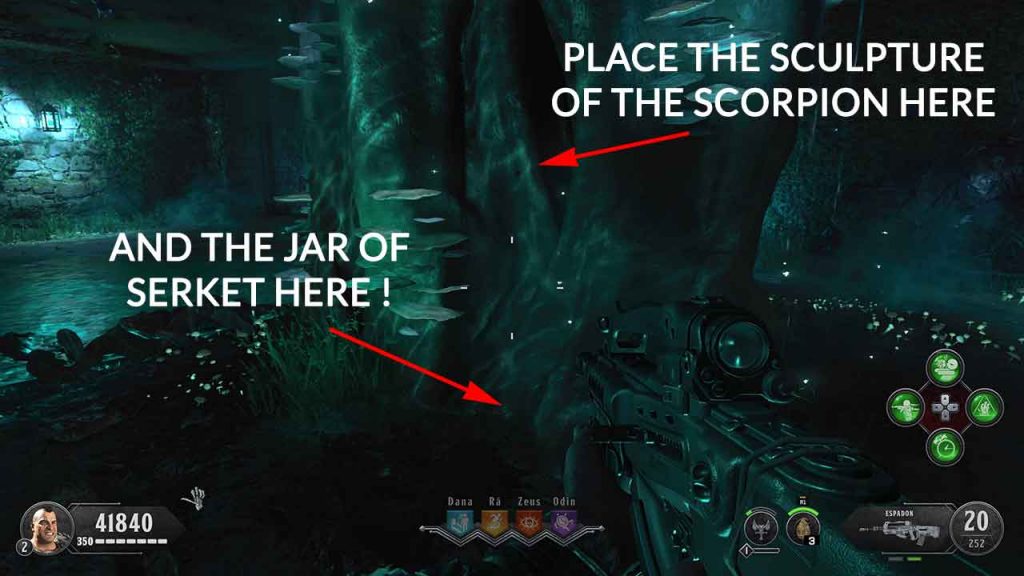 You will have to hold an extra round in front of the zombies to see the jar completely fill with the poison of the tree that spills through the scorpion’s structure. Once the jar is filled and collected, look for the mystery box on the map (you know the box that gives a random weapon) and look on the left side of this famous box. You will see the message « hold the action button to poison the mystery box ». 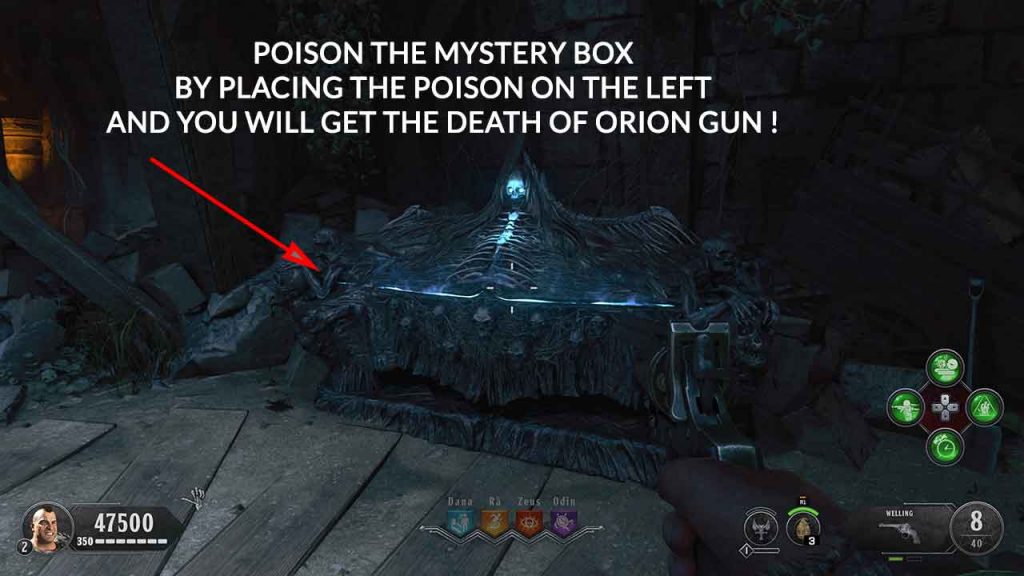 Do it and the next weapon the mystery box will give you will necessarily be the Death of Orion gun. All you have to do is go to the temple in the temple hall to turn Orion’s death into Serket’s Kiss Weapon in exchange for 5000 points.

Congratulations ! You have completed this guide, all you have to do is enjoy the remaining rounds with your powerful gun. By following this guide, you will unlock the « Serket Gift » trophy / achievement which consists of getting the « Serket Kiss » and even the « Constellation Prize » trophy / achievement by eliminating 9 zombies from a single uncharged shot with the Death of Orion gun.