Do you find Sekiro Shadows Die Twice a really difficult game or do you find it far too easy ? Whether you are in one or the other situation, we have two or three little things to say to you here that will have a direct impact on the difficulty of the game. There are no options in Sekiro to change the difficulty, but be aware that some of your actions will greatly facilitate your adventure or on the contrary make the game even harder…

In short! If you’re looking to make Sekiro Shadows Die Twice easier or more difficult, here’s all you need to know !

How to make Sekiro Shadows Die Twice even more difficult ?

At a certain stage of the adventure, you will have the opportunity to make the game even harder… On the other hand, you will be able to get more money and loot when you beat the various opponents.This is a very practical option and can be deactivated at any time to return to normal difficulty. If you are smart, you can take advantage of this mechanism set up by the From Software teams and use it to farm Sen (the currency) and increase your probability of obtaining rare loot. 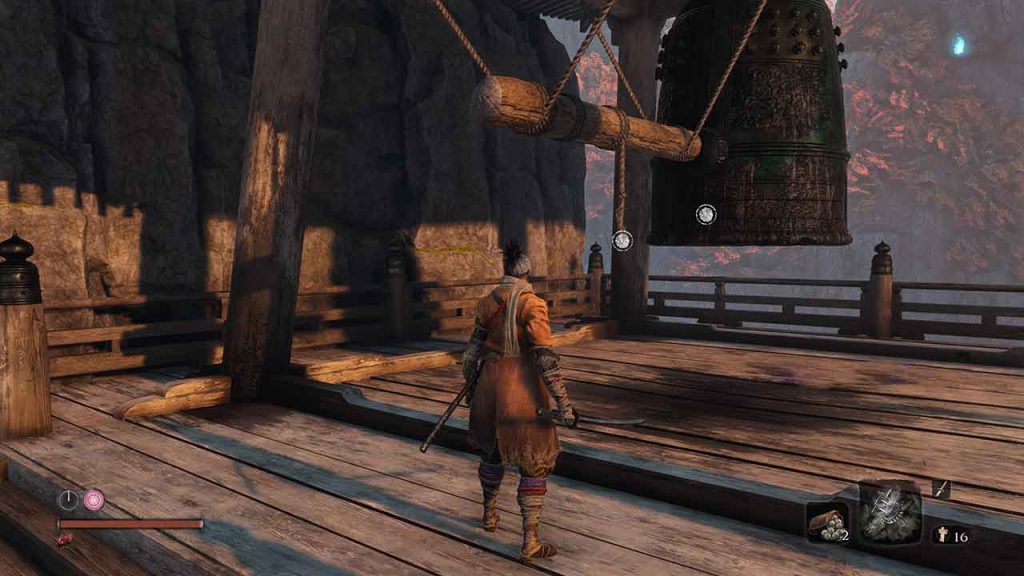 To increase the difficulty of Sekiro Shadows Die Twice, you must go to Senpou Temple, Mt Kongo.Instead of going to the big bridge where you are attacked by the armoured warrior, go around the mountain, you will find a passage that will take you straight to an sculptor’s idol « bell demon’s temple » where you will find a large bell. If you approach the big bell, you will see the following message :

« Do not ring this bell.Inviting misfortune is an act of virtue, but only the stoutest of hearts should ever consider it. »

If you ring the bell then you will get the Bell Demon item from the bell and you can read :

« Sinister burden. A demonic spirit sealed within the iron belle of senpou temple. Possesses thos who ring the bell, strengthening ennemies around them. The bell demon confers hardship, but perhaps also slightly better spoils. Using this item has no particular effect aside from causing the demon to leave. »

Know that at this very moment, all the enemies you will meet in Sekiro Shadows Die Twice will be even more powerful than before! But, as explained above, the counterpart will be a higher than normal rate of Sen (money) and loot.You can reverse the effect to return to a normal difficulty by using the « bell demon » item in your inventory.The curse will be lifted and you will see the message “Burden Dispelled”.

Use the bell as often as you want and to your advantage either to get money and items faster or simply to experience an even more intense adventure than it already is !

How to lower the difficulty in Sekiro Shadows Die Twice and make the game easier :

If you ask yourself this question, it’s because Sekiro’s gameplay has cause you some problems.The first few hours spent in Sekiro’s universe were indeed quite painful… The fault of some rather demanding gameplay mechanics.Our advice to drastically reduce the difficulty of the game is to search in every corner of the areas you will travel through.

Along the way you will find many gameplay elements that will make your Shinobi much more powerful.You will be able to increase your vitality, your attack power, get Shinobi tools that will allow you to exploit some weaknesses of the game’s elite targets and bosses.Everything has been thought out in Sekiro so that the player can at one time or another overcome the obstacle that stands in his way.

If you were expecting a magical option, we regret to inform you that Sekiro Shadows Die Twice does not have an « Easy » difficulty option and that the only way to succeed in this game is to use all the gameplay elements at his disposal without forgetting to learn from his own mistakes.