Pokemon Masters is the newest addition to the great Pokemon license that is coming soon on iOS and Android mobile devices. Like a certain Pokemon Go, this production is ambitious and solid enough to capture the attention of players around the world and could even become the new star (the fashion effect) of the summer of 2019. Although the summer is already well underway, the game is indeed scheduled to be released quickly, namely before the end of August 2019 if everything goes well.

If you are looking for information about this game, we invite you through this page to discover what the concept of « Pokemon Masters » is, what makes it interesting and how « The Pokémon Company » and « :Dena » intend to make this new adventure famous.

Introducing Pokemon Masters, what is the basic idea of the game ?

Pokemon Masters was born from the idea of Ken Sugimori, Executive Director / Artistic Director at Game Freak and designer of many of the trainers that Pokemon license players and fans have come across in previous generations. He left a comment about the relationship between the Pokémon and their trainer, a vision of what the world of Pokémon is like that which you will find just below.

The relationship between Pokémon and their trainer… Thanks to this tool called « Poké Ball », the relationship between creatures (Pokémon) and humans is very strong in the world of Pokémon. Regardless of their age or gender, humans can demonstrate incredible power by strengthening their bonds with the Pokémon. For humans and Pokémon alike, being together is more important than anything else.

The characteristics of Pokémon trainers… All trainers have their own preferences in terms of types, colours and forms, and these preferences influence their choice of Pokémon. Each trainer dresses according to the climate of the region where he is located. For example, Erika is an arena champion from the Kanto region who seems to be able to teach floral arrangement… Isn’t it natural that she likes Pokémon of the Plant type? I hope that this great meeting, not just of Pokémon, but also of Trainers, will bring a new dimension to the Pokémon world.

This is Ken Sugimori’s vision that served as the basis for Pokemon Masters, a game that brings together not only Pokemon but also the license’s iconic trainers. The game will play the « fan service » card to the full, allowing you to make friends with the Pokémon and the trainers who will fight alongside you, thus offering a new dimension to the Pokémon universe.

To design the new Pokémon Masters for iOS and Android mobile devices, The Pokémon Company teams turned to the giant: DeNA (a large Japanese company specializing in game development / mobile applications) with whom they partnered to develop the game. The production of Pokémon Masters was therefore entrusted to Yu Sasaki, a young talent from: DeNa who gave life to Ken Sugimori’s ambition to give as much importance to trainers as to Pokémon in the world of Pokémon Masters. 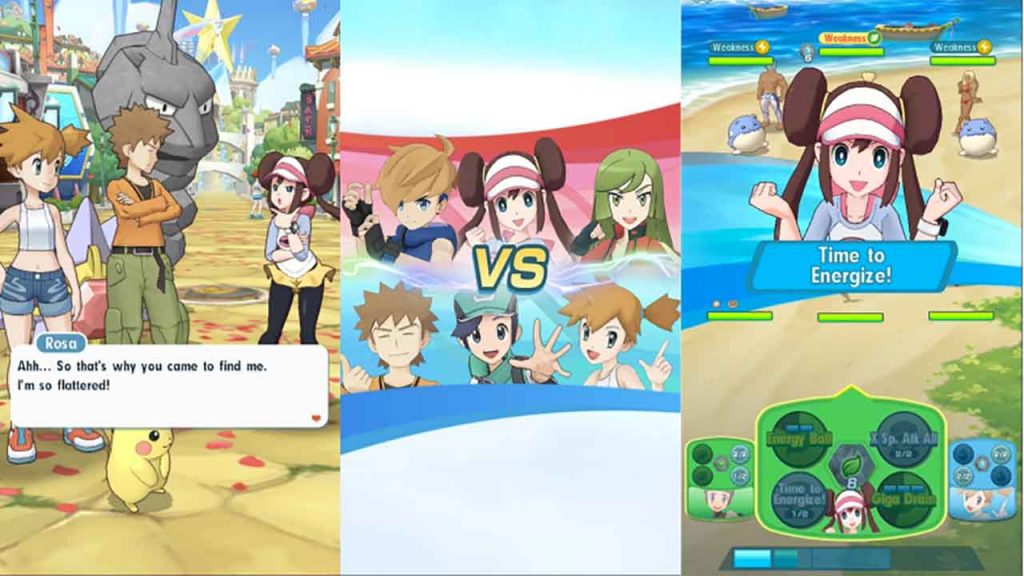 Where does the Pokemon Masters adventure take place, what is the name of the region ?

The plot takes place on the artificial island of Pasio, where trainers from all over the world have gathered to form new teams in order to win a tournament called the « World Pokémon Masters », a kind of league where only the best trainers are allowed. On this artificial island, each of the trainers came with a single Pokémon partner to form a duo, which will allow the main character of the game controlled by the player behind his mobile to meet them as the adventure progresses and have the opportunity to team up with their pairs to take part in battles between Pokémon. The goal will be to cross the Pasio region in order to collect enough badges to qualify for the World Pokémon Masters with the best trainers from all the regions known to date in the Pokémon license. 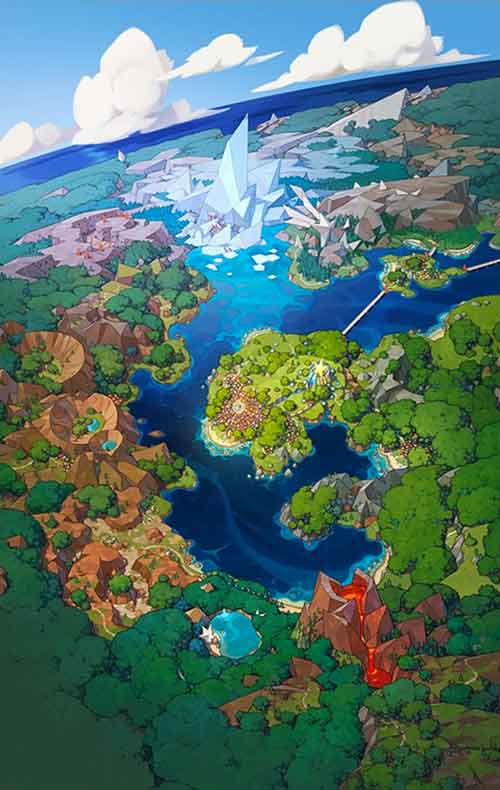 How do the fights in Pokemon Masters work ?

We knew the fights in 2vs2, in Pokemon Masters it will be possible to fight 3 against 3, which is a first in the Pokémon license. Each of the six trainers will send their single partner for the fight, like a classic RPG, participants have the opportunity to sequence attacks through a « Capacity » gauge that fills up over time. A partner’s attacks have different segments, it takes a number of these segments of the « Capacity » gauge to send an attack.

As the fights progress, players have the ability to use powerful Duo abilities just as trainers have the ability to use combat skills, allowing them to heal their Pokémon partners or temporarily improve their stats in combat. Whether you are a fan of Brock, Misty or other trainers who have made their mark on you over the past few years, you will have the opportunity to create your shock team in Pokémon Masters by recruiting trainers from previous major Pokémon games and cross the Pasio region to win the « World Pokémon Masters ».

How much does Pokemon Masters cost on iOS or Android ?

The game is free, just go to the Play Store or Appstore depending on whether you have an Android mobile or an iOS mobile and download it for free. Since the game is based on the « Free to Play » business model, some features of the game will be paid for, but not necessary to progress in the game.

When does Pokemon Masters come out on iOS or Android ?

Last we heard, Pokemon Masters is still expected for the summer of 2019, with summer running from Friday, June 21, 2019 to Monday, September 23, 2019. On the other hand, and from our point of view, this new game developed by :DeNa has every chance of being released before the end of the holidays and therefore before the end of August 2019. In fact, a beta test phase is already underway in « Singapore » and « Canada » with a demo version that provides an overview of the game’s content on Android. Android also means free downloadable APK file on the web, so expect to be able to play Pokemon Masters early if you have an Android device that is compatible with the game.