The Niantic Labs developers who are in charge of developing Pokemon Go have announced new dates for a special event that will allow players to fight and possibly capture the legendary Rayquaza! He will be available in raid battles on specific dates.

To prepare you for this event, we will inform you of the weaknesses of this Pokemon, which will allow you to prepare an operational team for the event. You will also find below the different dates where you can meet Rayquaza and especially give you his catch rate. We will also see if you will also have the opportunity to find Rayquaza shiny. You’re ready… Let’s go!

When will the legendary Rayquaza appear in the Pokemon Go raids ?

It is very soon, the devs of Niantic Labs have announced that the pokemon Rayquaza will appear in raids on the following dates….

So you have four full days to try to capture a Rayquaza! 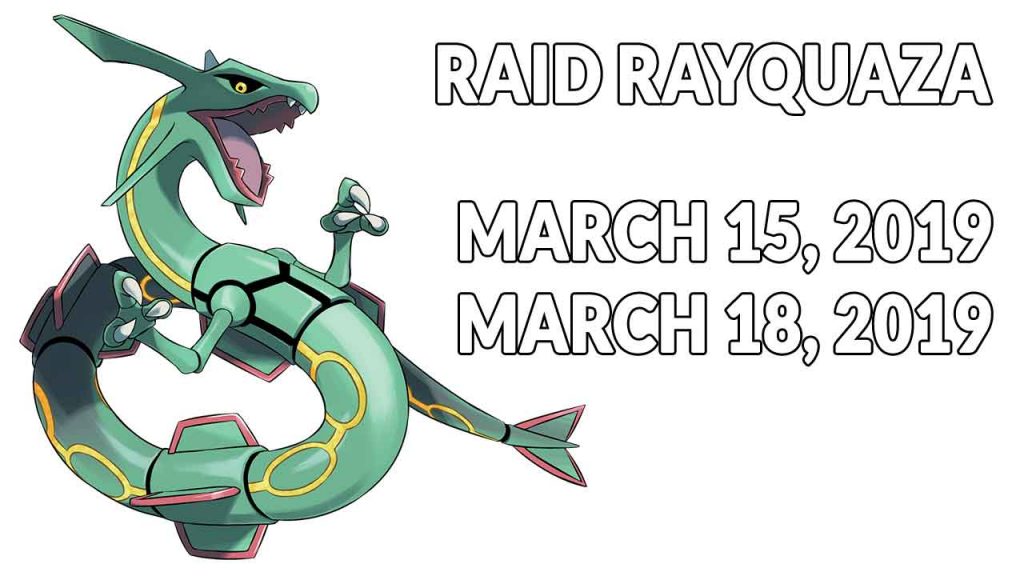 How to beat Rayquaza in Pokemon Go ?

Rayquaza is a dragon and flying type pokemon which makes it very vulnerable to ice type, but also to a lesser extent to rock, fairy, but also dragon types.

We strongly advise against arriving with an ice team, as Rayquaza could use the « Ancient Power » attack that will knock down your ice type without difficulty. Instead, choose a team that combines all the above elements to maintain a certain balance during the confrontation.

→ We recommend, for example, pokemons such as :

As a base, Rayquaza has about 2100 CPs that can be boosted to more than 2730 CPs depending on the weather. If the weather is windy then you will face an more powerful Rayquaza with stats up, a compromise that will allow you to get the creature with better stats if captured at the end of the raid.

How to capture Rayquaza and what is the catch rate :

If you and your team can beat the legendary one, then you will enter a phase that will allow you to capture it. Be careful, you can only use Premier Ball that you have obtained as a reward for fighting in the raid. Stay focused and make sure you make excellent and curved shots to increase the catch rate while making sure you have used a golden razz berry beforehand. Basically, you will have less than a 2% chance of catching it, but with an excellent throw and a razz berry you increase this rate to about 13% of the chance of catching it. All you have to do now is cross your fingers to capture Rayquaza!

Pokemon Go raid – is it possible to have a Rayquaza shiny ?

Although Niantic Labs teams often offer shiny versions of the legendary pokemon, we regret to inform you that this will not be the case for the special event that will allow Rayquaza to be confronted and captured during the raids.

cheats guide and wiki pokemon go
Share. Twitter Facebook Pinterest LinkedIn Tumblr Email
Previous ArticleNew update of 2GB to 15GB for the launch of season 8 of Fortnite what’s new ?
Next Article Wiki Outward everything you need to know about the Ninedots game before it is released