Pokemon Let’s Go Pickachu and Eevee came out on the Nintendo Switch, an adventure more accessible than ever before that can serve as a jumpstart for Pokemon Go players, but it also offers enough depth for the older players without forgetting to pull the nostalgic fiber rope since it is a pure remake of Pokemon Yellow, the opus that greatly popularized the series among children then and now grown up.

Whether you are a young player or a hardened adult with a child’s soul, you have a lot to learn about Pokemon Let’s Go Pickachu and Eevee, because beyond the simple remake Game Freak teams have done a thorough job of adding different gameplay and other mechanics that were not present in the original game. That’s why we’re offering you 10 tips and tricks from Pokemon Let’s Go Pikachu and Eevee to help you become an accomplished trainer !

Tip 1 – Pikachu or Eevee, the tail of your Pokemon tells you things :

You may not have noticed it, but when you travel the different roads, caverns and other places in the Kanto area with your Pokemon on your shoulder (Pikachu) or your hat (Eevee), it can happen that your faithful companion starts wagging his tail.

Well know that this is not a coincidence and that it is a gameplay mechanism added by Game Freak teams to show the player that an item is very close. When the tail of Pikachu or Eevee is moving in all directions because an item has been located, move slowly until the vibrations of the tail are shorter and shorter to locate a hidden item on the ground that you only have to pick up by pressing the « A » button on your controller.

Tip 2 – Observe the capture circle when you throw a Pokeball : 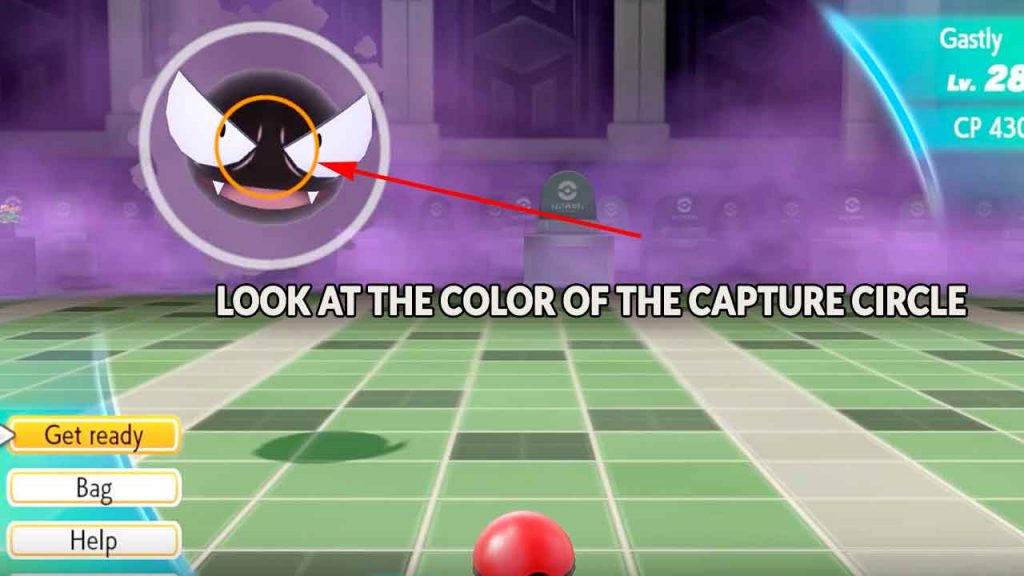 The new Pokemon capture system in Let’s Go Pikachu and Eevee will be able to confuse the license’s most hard-core fans since it was previously a matter of weakening a creature in battle to try to capture it. Now, battles with wild Pokemon are conducted in the same way as Pokemon Go or you simply have to throw the Pokeball to capture the targeted creature.

Before you frenetically launch your Pokeball stock, take the time to observe the shrinking circle. The color tells you whether capturing the Pokemon you are targeting will be difficult or not ! A green circle means that you will have no difficulty catching the creature, a yellow color means that things will be a little more complicated while a red circle indicates that catching the Pokemon will be very difficult.

By sending berries you can make some captures easier, for example with Razz Berry which slightly facilitate a capture for a single Pokeball throw. You can also lower the level of a red to yellow or yellow to green capture circle by using another type of Poké Ball, such as Great Ball or Ultra Ball.

When you capture Pokemon in the tall grass, you will certainly aim to complete the Pokedex by catching all the creatures in the game. You can make it easier for yourself by using Lure in the area you are visiting to bring out rarer Pokemon.

It doesn’t always work, but using this item can bring you some surprises. You can buy them in the different shops of the game, it’s like the item repels, just open your inventory and use it for the item to take effect in the area.

Tip 4 : Badges are not only here for the show :

Imagine that you want to make an exchange with another player and that the Pokemon at a too high level, you will then have to get badges to make you obey by your new companion. Each time you get a badge, you break this limit of 10 levels, the one who owns the 8 badges no longer has a limit of levels to be obeyed by his Pokemon. 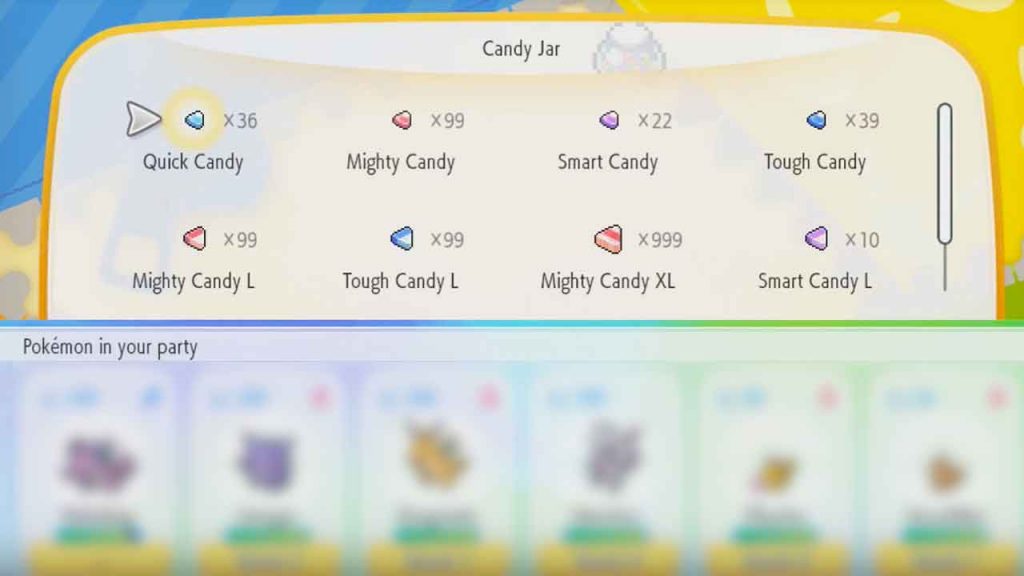 A Pokemon’s level, nature or type are no longer the only factors that determine whether it will be more powerful than another creature. Now you will have to be careful about the « CPs » that determine the overall power of your Pokemon.

You can increase this value by giving your companion candy that is stored in the candy jar by opening your inventory. Candies are obtained in different ways, for example, you can make capture chains from the same Pokemon to increase the probability of getting candies that will improve your companion’s statistics and CPs after use.

Be careful, there is a limit of candy to give for each of your creatures… So choose carefully ! For Pikachu or Eevee, for example, you can get very special candies during the adventure that allows you to increase all statistics by 1 point.

Tip 6 – You can give Pokemon to Professor Oak :

He will tell you about Pokemon science and research, but most of all, you will see the possibility of getting candy easily and thus increasing the CP number of your Pokemon’s. Indeed, during your journey in the Kanto region you will certainly catch tons of duplicates of the same Pokemon that are already stored in your box.

Instead of leaving your box at Pokemon to clutter up, you can make donations to Professor Samuel Oak, he will count the number of creatures you have given him and reward you with many candies… Who knows what he will be able to give you at the end !

Tip 7 – Take the time to talk with all the characters in the game : 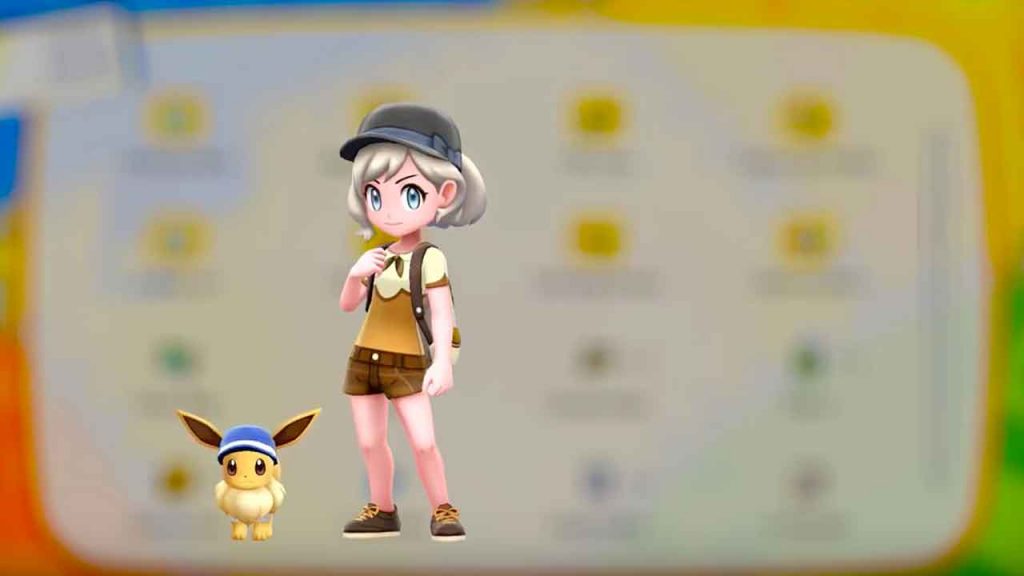 During your travel in the Kanto region of Pokemon Let’s Go Pikachu and Eevee you will meet tons of characters. If some may seem insignificant to you with dialogues that fit on two lines, others will prove useful and reward you with items… And especially with new outfits / costumes for your character and your companion (Pikachu or Eevee).

With this in mind, take the time to talk with all the characters you meet in the towns (or road) and your efforts will be rewarded !

Tip 8 – Get your companions out of their Pokeball :

In addition to Pikachu on your shoulder or Eevee on your head, you can also choose to take another one of your Pokemon out of its Pokeball to follow you on your travels in the Kanto region. Simply open the « team » menu, choose a Pokemon and use the « exit Pokeball » function to see a small star appear on the creature in question.

When you exit the menu, you will see that the Pokemon is following you. Note that this Pokemon can tell you where hidden items are located.

Tip 9 – Better than a bicycle, a Rideable Pokemon :

All the old ones will remember the possibility of getting on a brand new bicycle to move faster in the original game (ahhhhh, what a beautiful period). Things have changed a little over the years and evolutions continue with Pokemon Let’s Go Pikachu and Eevee, since it is possible to use a Rideable Pokemon to move faster by travelling along the roads and in the towns in the Kanto region.

If a Pokemon is big enough (Charizard, Onyx, Persian, etc.), simply remove it from its Pokeball as explained in Tip 8 and your character will climb on the back of the Pokemon in question.

Tip 10 – You can get large multiplicators of experience points :

With Pokemon Let’s Go Pikachu and Eevee, Game Freak teams have evolved the way to increase the level of Pokemon. There are the classic battles that give XP points, but there is also the game’s capture system. Each time you make a capture, the six Pokemon members of your team receive a certain number of experience points.

Tiny or Huge Pokemon can be easily recognized on the map and in the tall grass since a whirlwind rotates around the target creature. A Pokemon with a blue vortex will be Tiny while a Pokemon with a red vortex will be Huge. Have fun getting the best multipliers of experience points to increase the LvL of your Pokemon to 100 and become the best trainer in Kanto (one day you also become master pokemon) !