When you have finished the 32 chapters of Octopath Traveler, you will feel a kind of big empty void… As if something had escaped you during this long journey… Quite a few elements of the scenario remain unanswered despite obvious connections between the 8 stories… It may be time for you to learn the truth about all this, don’t you think ?

Attention, if you have not finished all the chapters of Octopath Traveler, know that from here we will spoiler some elements to guide you to a dungeon bonus of the game that represents the ultimate challenge. If you haven’t finished the chapter 4 of all the heroes in the game yet, we advise you to keep this page in a corner and come back when you want to know what happens after you finish the 8 Octopath Traveler scenarios !

What to do after finishing the story of Octopath Traveler :

At the end of the 4th chapter of the 8 protagonists of Octopath Traveler, you will be entitled to an Artwork with « End » marked on it, but is the game really over after the 32 chapters ? The answer is no, and if you’ve been paying attention, there are glaring connections between the 8 characters you’ve guided since the game began. Who really is Graham Crossford, is he connected to the « Gate of Finis » and who is the real villain who has been pulling the strings since the beginning.

If you ask yourself these questions, know that you will get your answers in the real end dungeon of Octopath Traveler which is simply the Gate of Finis or you will fight with the 8 heroes the real final boss, the 13th god Galdera. If his name doesn’t mean anything to you at the moment, the rest of this guide will help you see more clearly, because we will explain here how to access the Gate of Finis of Octopath Traveler.

You must follow the steps below to unlock Octopath Traveler’s real final battle. We will guide you to the Gate of Finis where the side story « At Journey’s End » will begin. You will then find the answers directly in the dungeon. You’ll have to fight a series of bosses who will release writings every time. It is highly recommended to read these writings to fully understand the different connections between the 8 stories.

But before that, we’ll have to open the access to that famous Finis portal. Here’s what you have to do !

→ First step – complete the tale of the daughter of the dark god part 1 :

The first thing to do is to go to Bolderfall in Clifflands, the area where Therion’s story begins. You will find a woman called Lyblac near the Ravus manor who seems to be waiting for the ideal companion. There’s a soldier next to this woman, just challenge him with Olberic or H’aanit and win the fight. There will be a discussion between Lyblac and the soldier Alphas, you will learn that the young woman is not interested in him, she thinks that the ideal companion must have blond hair and deep blue eyes… So the story of the daughter of the dark god part 1 ends. 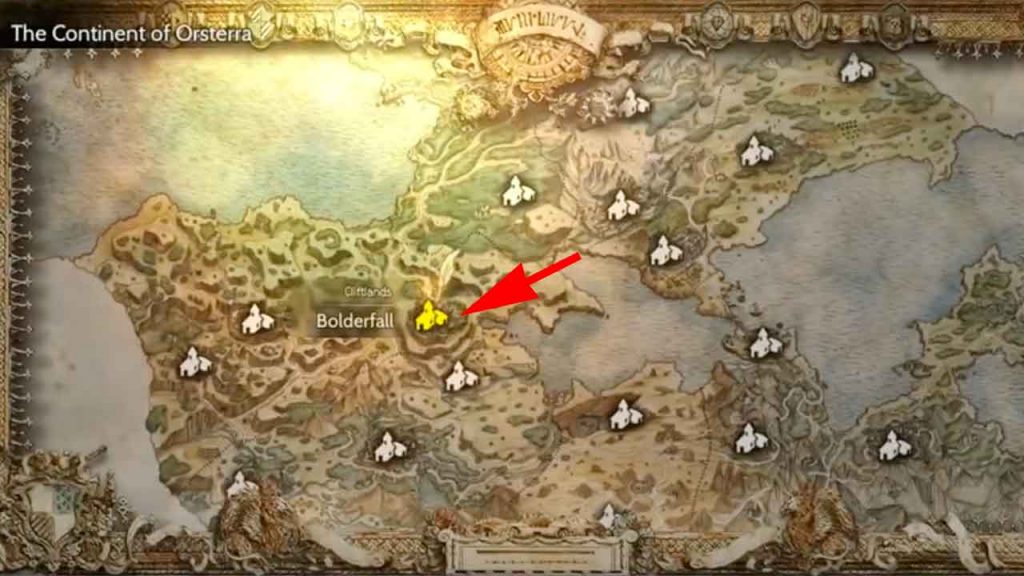 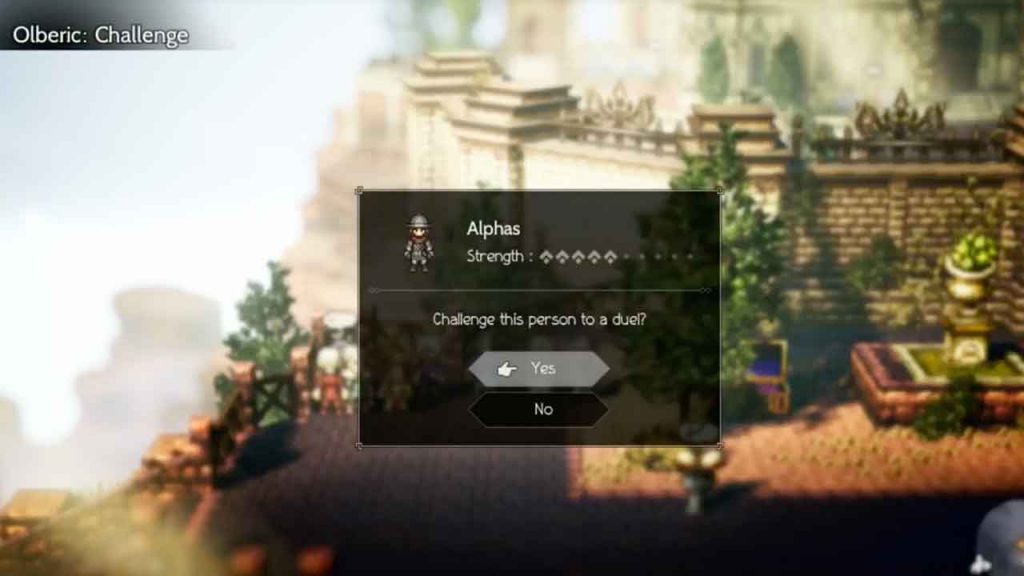 → Step Two – Complete the story of the daughter of the dark god part 2 :

You will now have to go to Saintsbridge in the Riverlands or you will find Lyblac on the bridge to the left of the village. After a short exchange, you find the soldier Alphas decidedly attracted by the young woman. Once the scene is over, interrogate the soldier Alphas with Alfyn or Cyrus to collect his poem. You will have to give it to a woman named Flora, who is also in the same village in front of the cathedral of Saintsbridge to be precise. As you hand him the letter, you’re looking a scene between Alphas and Flora and at the same time see the strange young woman Lyblac leaving the cathedral. She seems to have found what she is looking for… This puts an end to the side story of the daughter of the dark god Part 2. 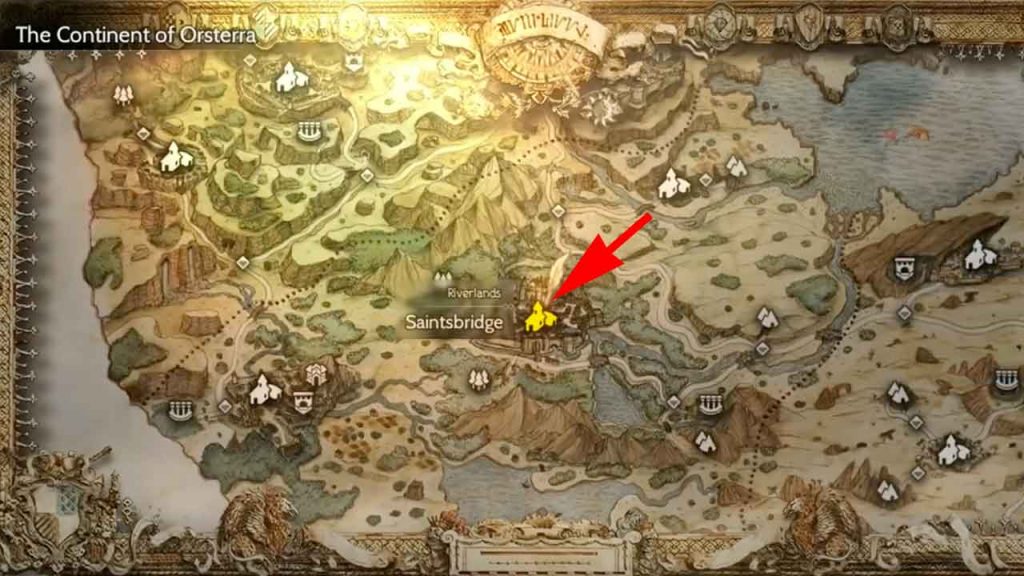 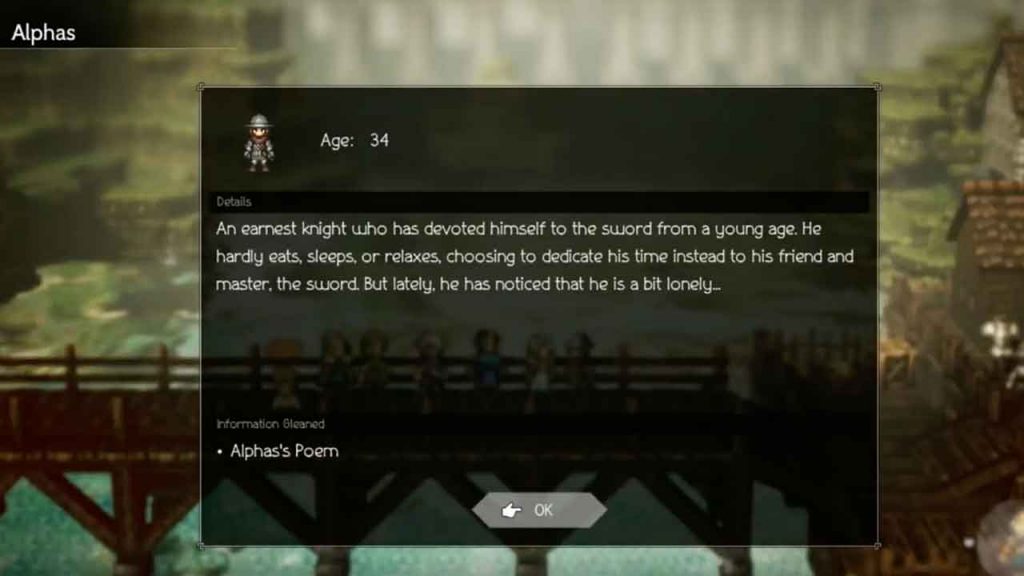 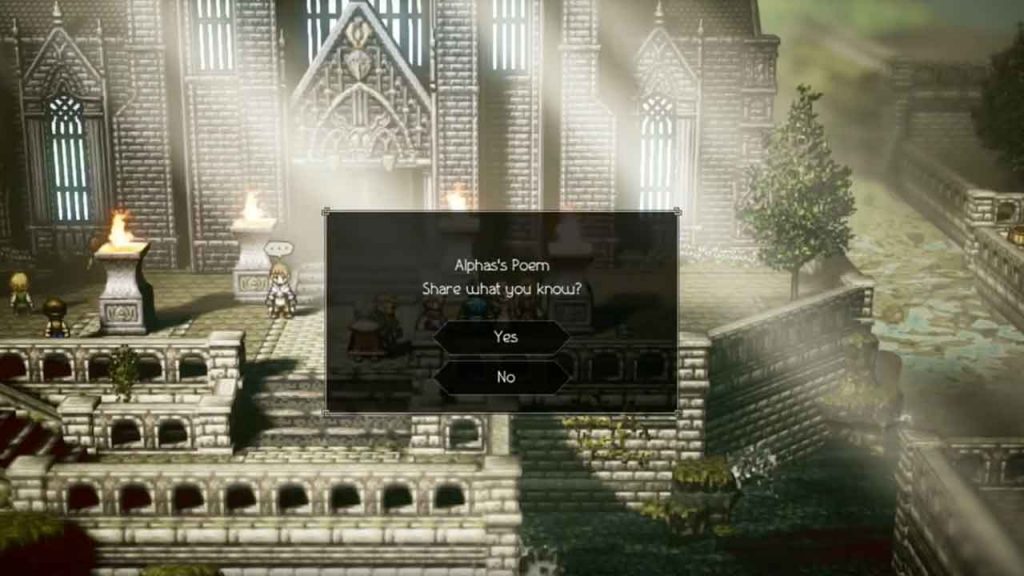 → Step Three – Complete the tale in search of father part 1 :

Go to Noblecourt in the Flatlands, you can start a side story in this city on the stone bridge. You will indeed meet Kit, he is looking for his father, but lacks motivation, he would need travelling with companions… And luck is with us, because in the same city, you can meet an apprentice actor near the cemetery of Noblecourt (in the second section of the city) that you will guide / charm with Primrose or Ophilia to guide him to Kit. After a scene between the two characters and the travelling theatre, the story in search of father part 1 ends. 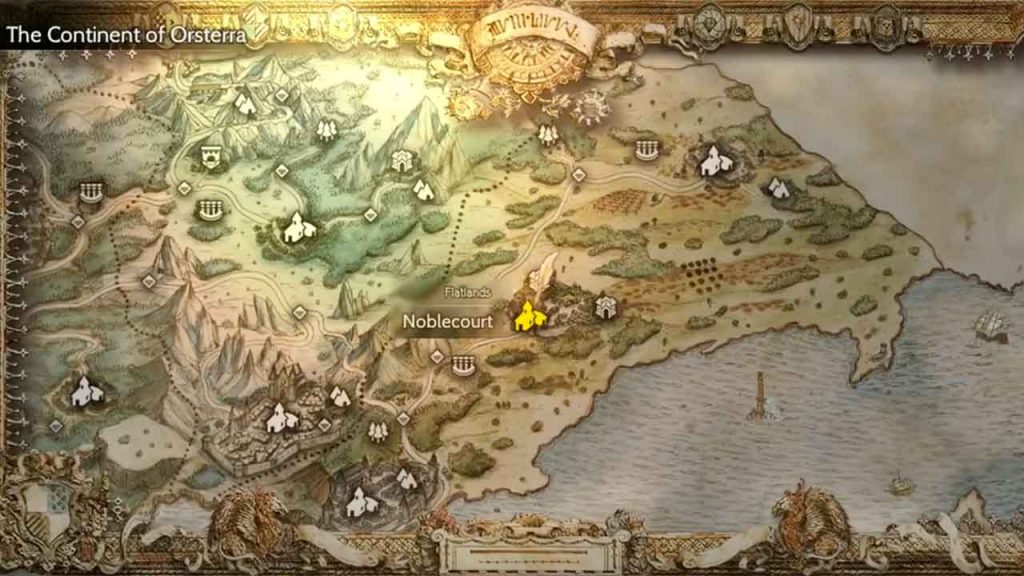 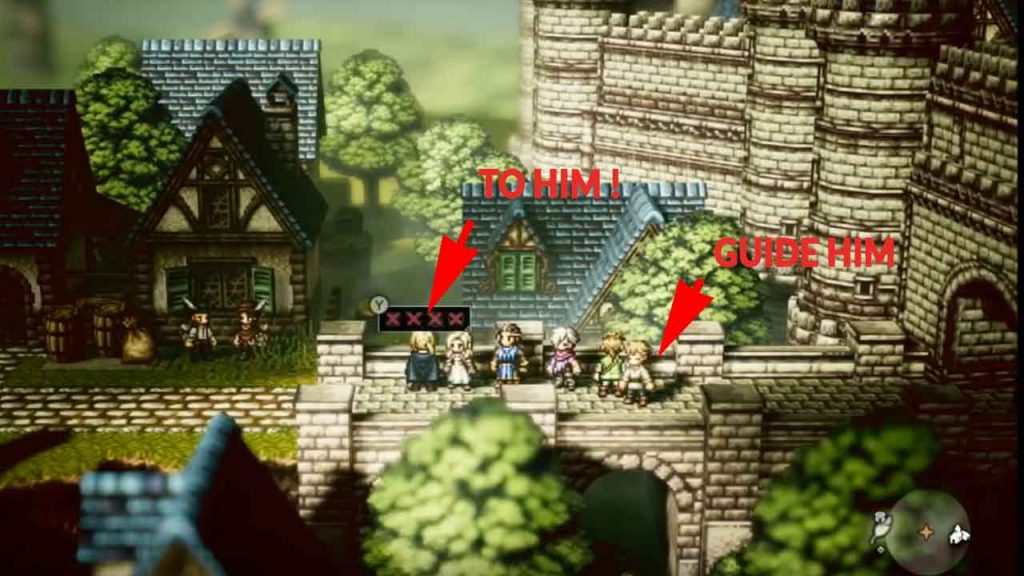 → Step Four – Steal or buy the Lapis Lazuli for Kit :

For Kit’s next story, you’ll need some Lapis-Lazuli. Might as well do it now before we go see him. For that, go to Grandport in the Coastlands region of the continent of Orsterra. Near the auberge and the two local shops, you will find an itinerant ore merchant who has Lapis Lazuli in her possession. That’s good. That’s what we’re looking for. You just have to steal it with Therion or to trade the item with Tressa, the essential thing is to get this item for the rest of the side story. 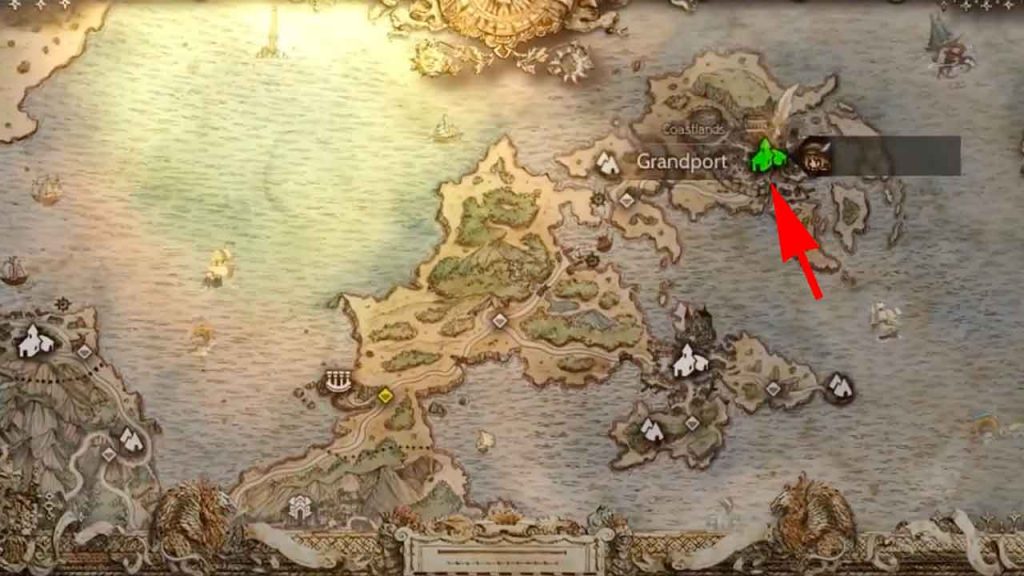 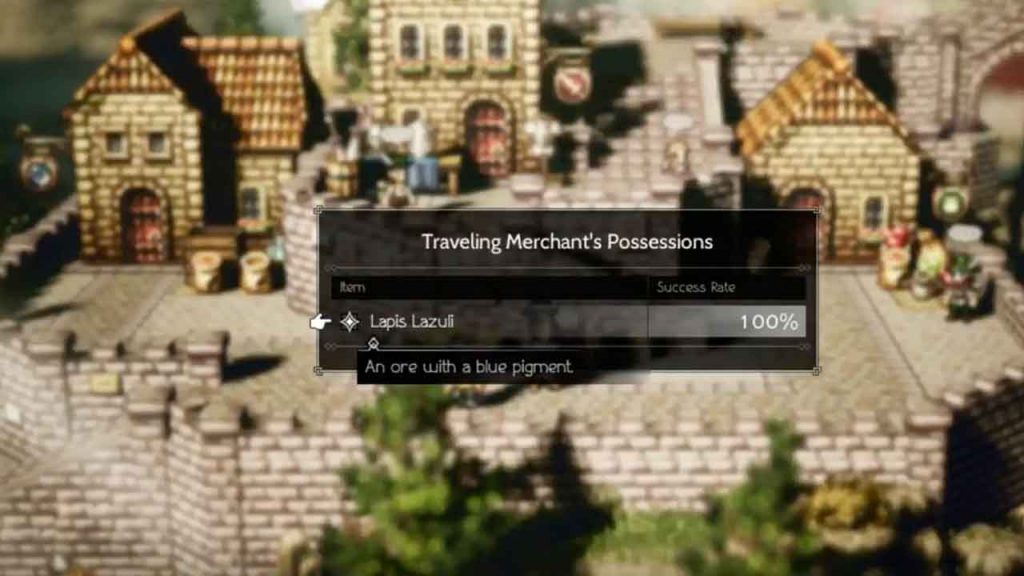 → Step Five – Complete the story in search of father part 2 :

You will find Kit and the itinerant theatre group on the beach of the Moonstruck Coast in the Coastlands region. He would like to leave the theatre, but does not want to leave without thanking them. Give him the Lapis-Lazuli freshly stolen / bought and a scene will be set off between Kit and the head of the itinerant theatre who thanks Kit for having redone the sign. The man will then leave without regret in search of his father especially as he met a woman who told him how to find his father (strange…) which will end the story in search of father part 2. 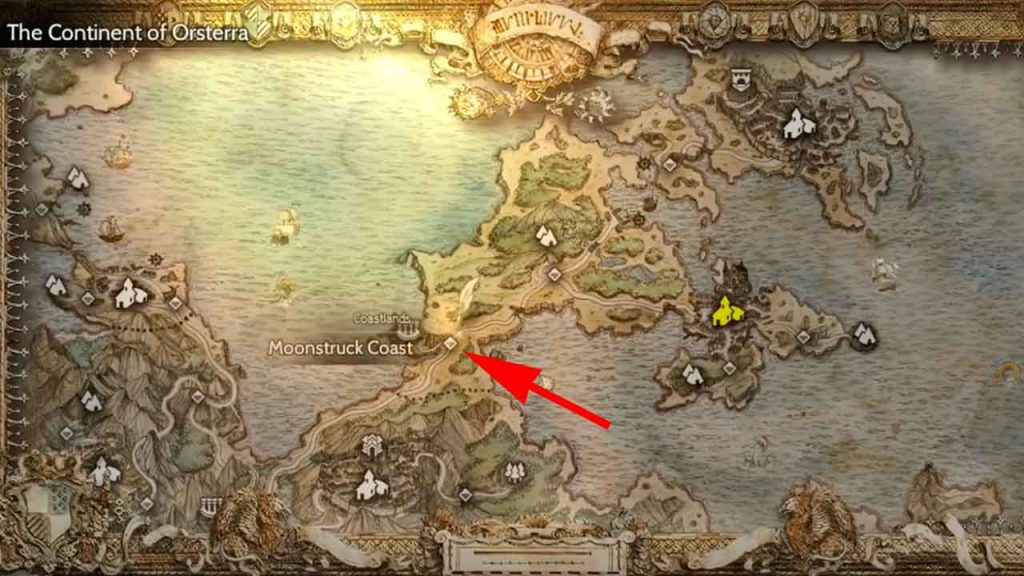 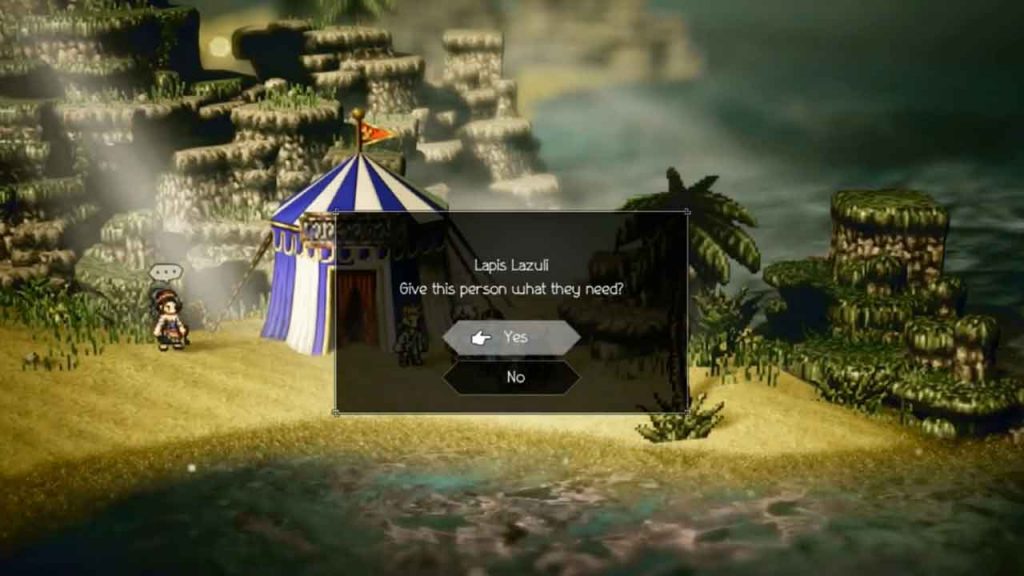 → Step Six – Complete the tale of Alphas and the impresario :

Hang on, you’re almost there ! Go now to the Woodlands of Orsterra in the village of S’warkii and head towards the western path of S’warkii trail. On the road to Bolderfall, you will meet the leader of the itinerant group, who seems to be having trouble with a monster from the area. A passing swordsman has volunteered to hunt the beast, but you will quickly discover that he is no match. This swordsman is none other than the soldier Alphas… What is he doing here…? In any case, the story of Alphas and the impresario begins and you have to take down the tiger that is just to the left in the forest. 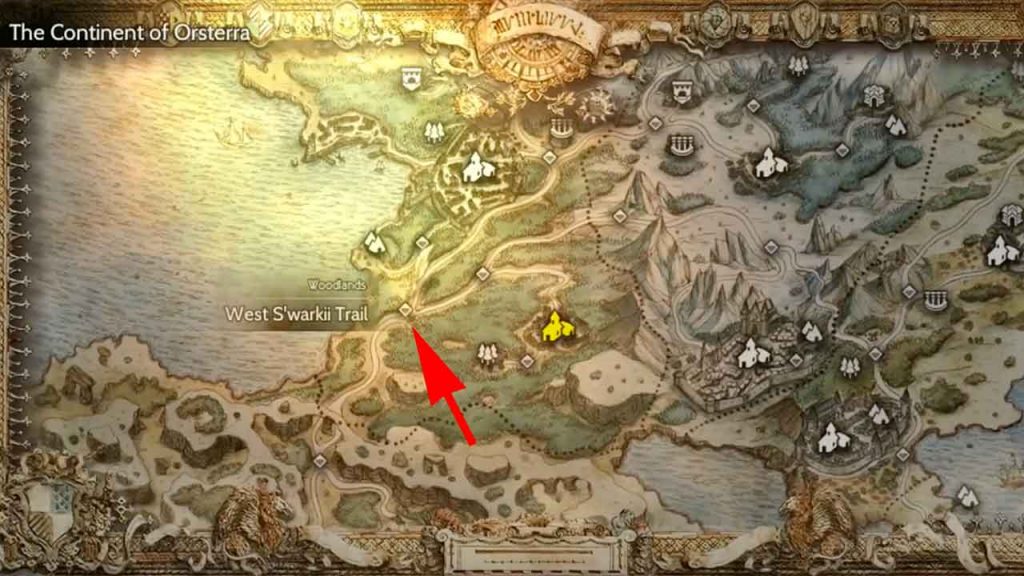 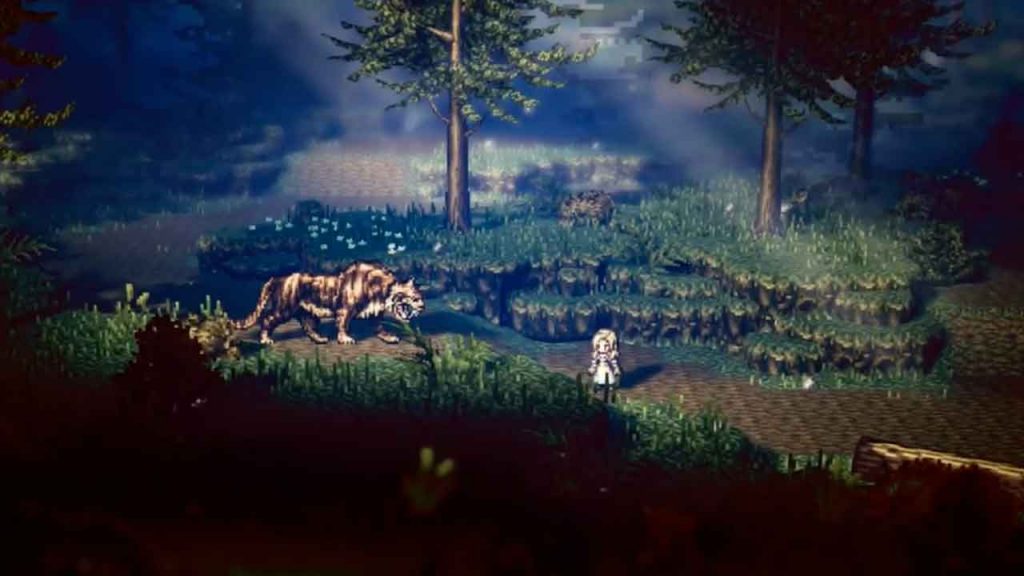 → Step Seven – the ruins of Hornburg and the passage to the Finis Gate :

After having slain the tiger, you learn that Kit has left a letter or he explains how to find his father… A woman would be able to help him so he made way with the abandoned ruins of the ancient kingdom of Hornburg. At the same time, you learn from Alphas that the Lyblac woman has also found the companion she was looking for… After the scene, speak again to Impresario and the game will tell you that you can now teleport to the ruins of Hornburg using the fast travel. The place is located at the very bottom right of the map of Orsterra very close to the Everhold in the highlands. 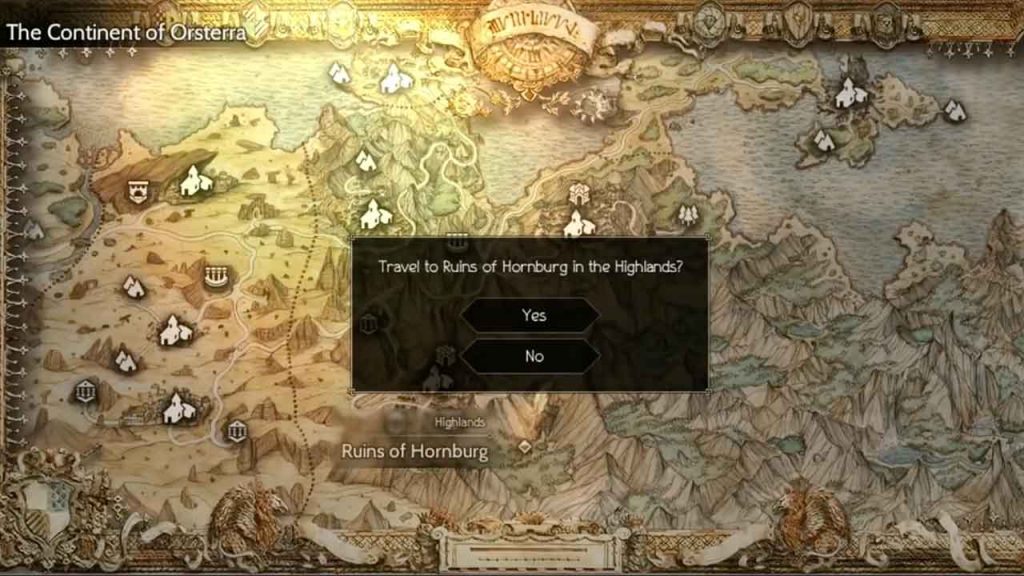 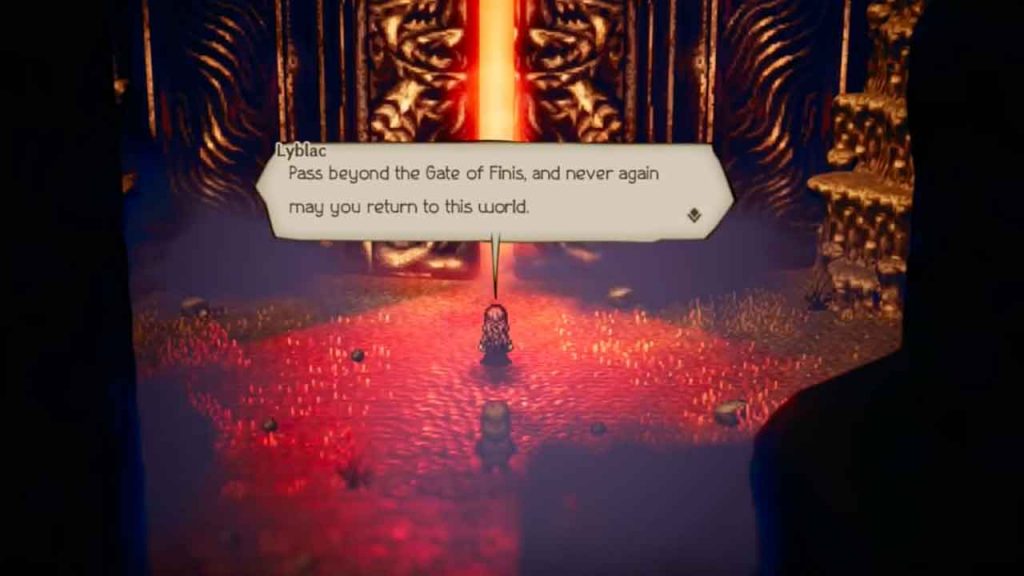 Come in and you will learn the whole truth about Kit, Lyblac, Graham Crossford and the 13th god Galdera. Note that there is no save point in this dungeon, you will have to fight without a break 8 bosses, including the true final boss Galdera which has two forms. Note that all the characters will be put to contribution in this fight, if your characters are not all at least at level 70, it is useless to try this challenge, a preparation is necessary to defeat the god Galdera. Good luck !