Recently, Epic Games teams have been offering players from the Fortnite community the opportunity to take part in a new event known as an « ice storm » that consists of finishing a series of challenges in order to obtain exclusive rewards, including the Winter’s Thorn Glider that will perfectly match the Ice Queen’s skin if you have it (available in the game shop).

No less than 13 challenges with various objectives are to be accomplished throughout this event to obtain the proposed awards. This event was also an opportunity for Epic Games’ development teams to review the entire MAP in Battle Royale mode since it is now completely covered with snow. A freezing blizzard hit the game map and a horde of zombies, also known as the « Legion of Ice », took over the area.

The list of awards obtained by completing the challenges of the Fortnite Ice Storm event :

By completing 6 of the 13 challenges, you will obtain a Blue Metallic Wrap. You can apply it from your player locker to change the appearance of the weapons and vehicles you use in the game.

By completing the 13 challenges proposed with the Fortnite « ice storm » event, you will be able to obtain an exclusive glider. The Winter’s Thorn Glider which will therefore match the new skin / new outfit Ice Queen’s available in the shop of the game and her ice scepter currently sold respectively 2000 V-Bucks and 800 V-Bucks. 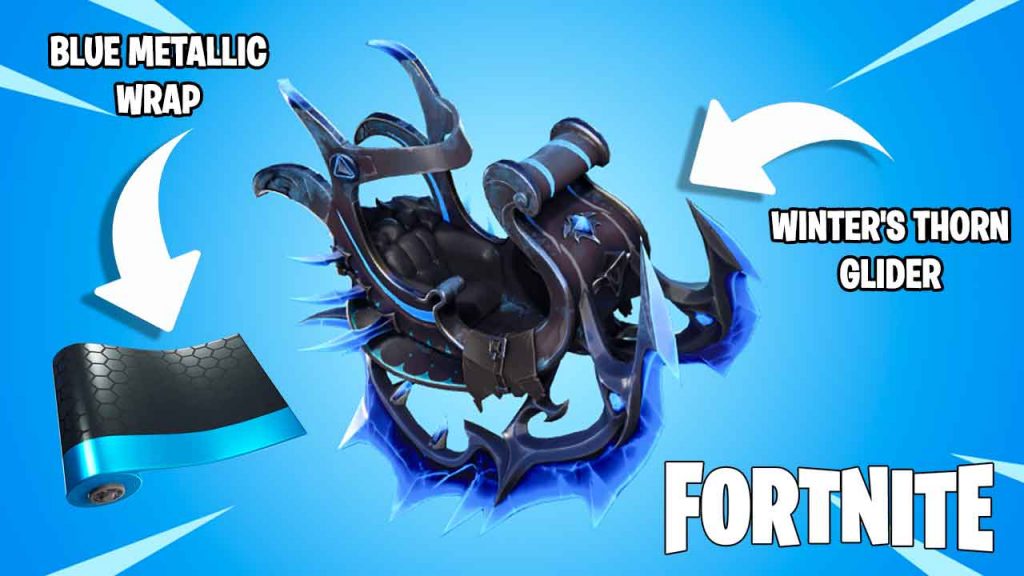 The list of all the challenges of the Fortnite Ice Storm event:

We have listed all the challenges of the event below. Some may appear in disorder, but it’s all there !

→ Challenge 1/13 – Destroy ice Fiends (250) – Reward 500 XP.
For this first challenge, approach an Ice Shards that creates Ice Legion monsters, you simply have to kill « Ice Fiends Demons » that are easily recognizable by their classic zombie appearance.

→ Challenge 3/13 – Destroy ice Brutes (destroy 100) – reward 500 XP.
Ice brutes are tougher than others and are recognizable by their larger size.

→ Challenge 5/13 – Destroy ranged ice demons (destroy 150) – Reward 500 XP.
Some legion monsters attack from a distance, they will be your targets to succeed in this challenge.

→ Challenge 6/13 – Destroy the golden ice brutes (destroy 20) – Reward 500 XP.
Even more resistant than the brutes, the golden version of this species of monster is more difficult to locate, but you will have to destroy 20 of them to succeed in this challenge. After having successfully completed these first 6 challenges, you will be rewarded with the Blue Metallic Wrap. You still have 7 more challenges to get the Ice Queen’s glider.

→ Challenge 7/13 – Deal damage to the legion with shotguns or SMGs (inflict 10,000 damage points) – Award 500 XP.
No secret here to succeed, get the weapon you need and hunt down legion monsters to cause them enough damage to validate the challenge.

→ Challenge 8/13 – Destroy a total of 10 ice shards (in several matches) – Reward 500XP.
You must locate the ice shards from which the ice legion monsters come out and destroy 10 of them in a single game or by playing multiple games in Battle Royale mode.

→ Challenge 9/13 – Destroy Ice Legion monsters (destroy 300) – Reward 500XP.
You simply have to track down the different types of ice legion monsters and destroy 300 of them to validate this new challenge.

→ Challenge 10/13 – Destroy a total of 100 ice shards (in several games) – Reward 500XP.
As one of the previous challenges, you will have to walk through the snow-covered MAP of Fortnite to destroy no less than 100 ice shards to validate the challenge.