To prepare Assassin’s Creed Origins players for the upcoming of the new game expansion The Curse of the Pharaohs, Ubisoft teams have added a new introduction quest to this DLC in version 1.4.0 of the game.

Regardless of whether you plan to purchase the DLC The Curse of the Pharaohs or not, this new introduction quest is available to everyone ! To take advantage of it, simply turn on your console or start the game on your PC and install the update 1.4.0.

A new icon will appear on the Assassin’s Creed Origins map and you can enjoy this quest. The icon appears in two different places of the game, you just have to go to either Hermopolis or Krokodilopolis to start this secondary quest of level 40.

How to complete the DLC quest The Curse of the Pharaohs – Assassin’s Creed Origins :

Once on the place, go and see the woman or the man (it depends on the chosen location) who makes incoherent words so that Bayek can ask herself about the golden light near Thebes… So begins the quest  » Lights Among the Dunes « . 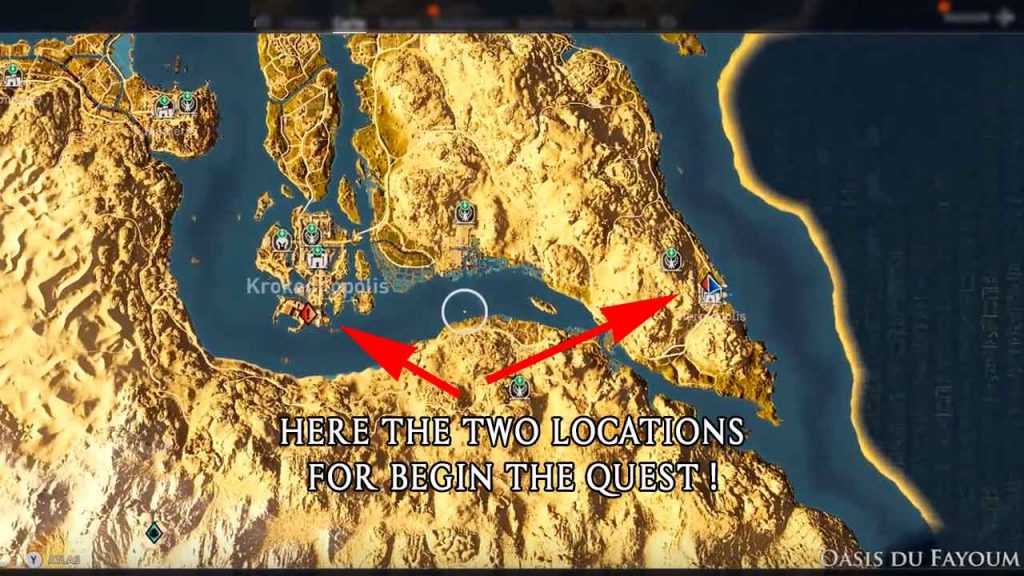 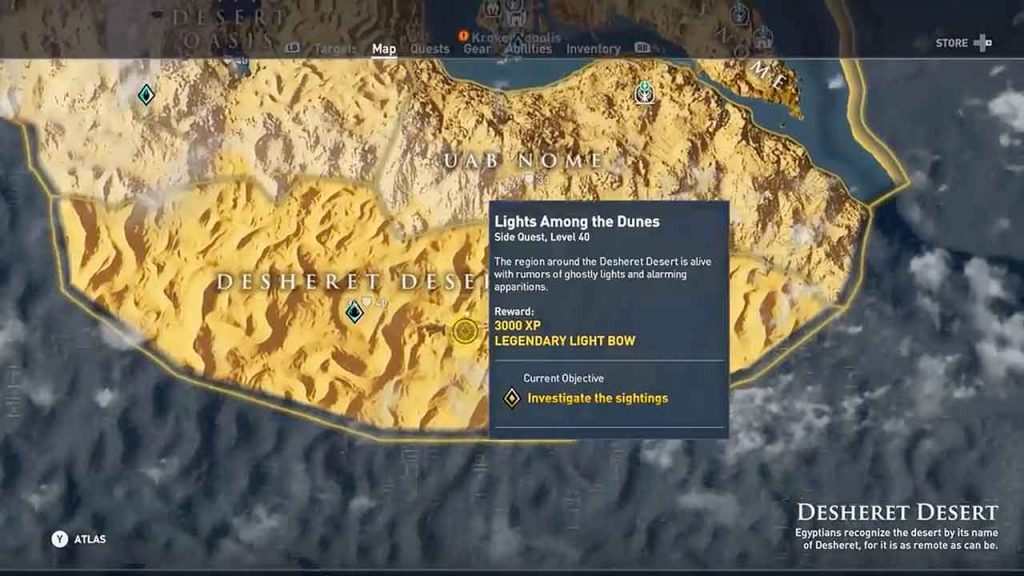 Information on the Quest of Lights Among the Dunes :

The region around the Desheret Desert is alive with rumors of ghostly lights and alarming apparitions.

Once the quest begins, open your map to see the objective that is located right in the sand dunes of Desheret Desert, just south of Assassin’s Creed Origins map. When you arrive at the site, Bayek notices that the place has changed since his last visit, you will see lightning coming out of the crevasse. Call Senu to probe the surroundings and locate your target.

We’re gonna have to go down that big crack. But beware, there will be new enemies. Exterminate them and keep moving towards your goal. You will find in the trench an entrance to the tomb of Seth-Anat. You can’t miss it, two flames are located just in front of the entrance to the tomb.

When you arrive at the location, you must investigate the tomb, walk to the large pillar of light and find someone on the ground who seems to be in trouble. 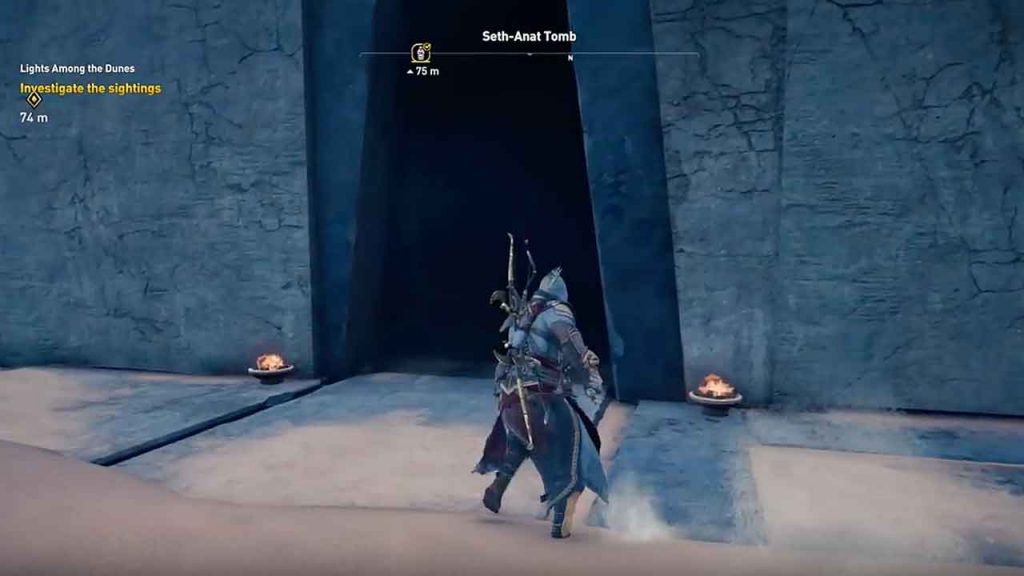 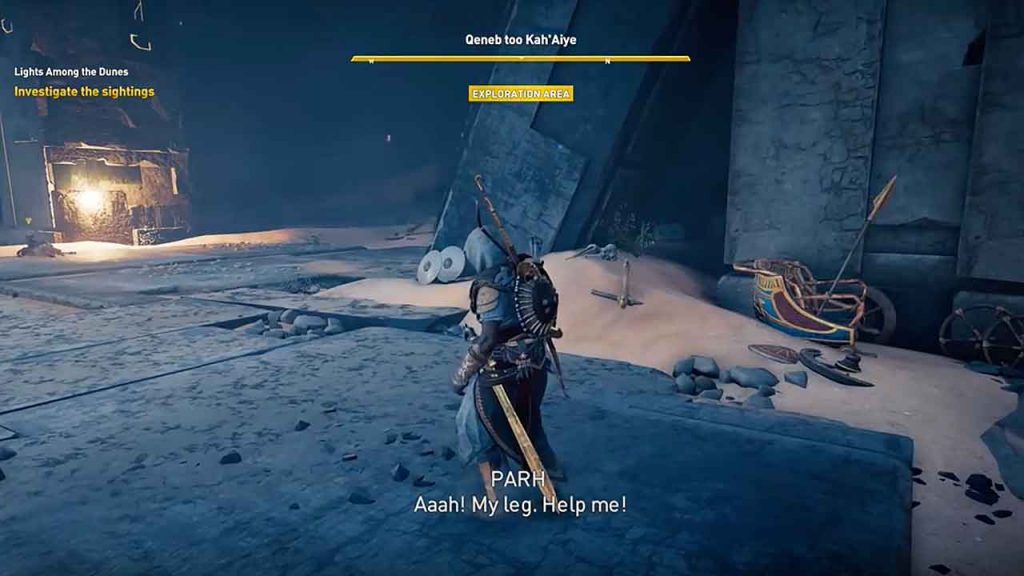 After the dialogue with this character, the quest will be updated and you will have to find and retrieve a mysterious artifact. You’re gonna have to get out of the tomb and head north to the desheret desert. You can’t miss the place of your next objective, a gigantic halo of light will be visible for miles around. As you approach this light, you will be able to see many people in full ritual before the lifeless body of the camel of Parh (the man who was wounded in the temple). Approach the camel and interact with light to retrieve an unidentified artifact that is a quest object.

Beware, when you take possession of the artifact the ritual people will enter into a murderous frenzy and attack you ! Once you have eliminated everyone, the goal update and you will have to return to Seth-Anat’s tomb to bring the artifact back. On the way, you will encounter several enemies on horseback.

When you arrive at the tomb, you will notice that Parh (the man who was wounded in the temple) has disappeared… Come near the marker of the objective to replace the mysterious artifact to its place of origin. Unfortunately for Bayek, this will cause the curse of the Pharaohs and a series of enemies will appear around him. No choice, you must flee the tomb ! When you reach the exit, Bayek will collapse and wake up some time later in an unknown place.

A woman then tells him that he was found wandering aimlessly in the sand dunes. This concludes DLC’s first quest for The Curse of the Pharaohs of Assassin’s Creed Origins. You’ll get 3000 XP points as a reward, along with the legendary Light Bow’s Spirit-Catcher. See you on March 13th on PC, PS4 or Xbox One to discover the next story of the expansion of The Curse of the Pharaohs.