As you progress through the worlds of Kingdom Hearts 3, you can unlock new mini-games for your Gummiphone in the « Classic Kingdom » section. These are Game & Watch style games for experts… There are a total of 23 mini-games to get throughout the history of Kingdom Hearts 3, if you want to get them all, we have compiled a list that will allow you to discover the location of each of these mini games.

Where are all located the classic kingdom games from the Gummiphone in Kingdom Hearts 3 :

The very first mini game « Giants Land », you will automatically get it with the « Classic Kingdom » function of your Gummiphone. All the rest of the mini-games can be unlocked by visiting the different worlds of Kingdom Hearts 3, here are all the locations ! 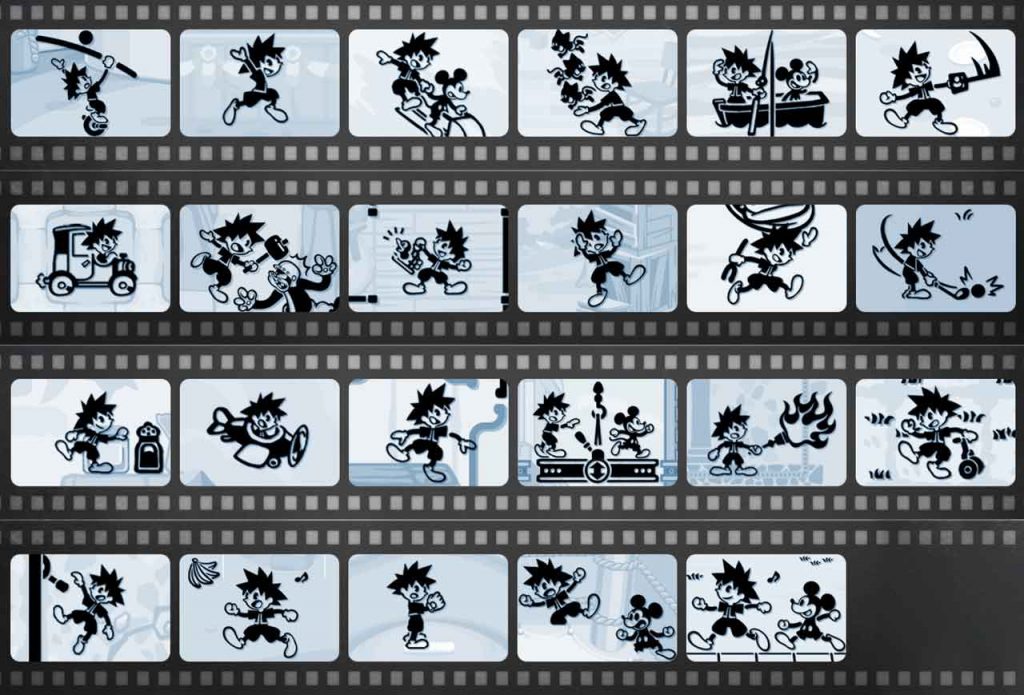 → Unlock the four mini games on the display panel of the twilight town :

In the twilight town, very close to the Mog shop. There is a « Now Showing » bulletin board, where you can download games from the classic kingdom to your Gummiphone. There are several that appear throughout the adventure, you will unlock thanks to this panel the mini-game, « Mickey, The Mail Pilot », « The Musical Farmer », « Building A Building » and « The Mad Doctor ». If the scoreboard offers you nothing, you just have to come and consult it a little later when you have progressed further in the adventure.

In the world of Toy Story, go to the Galaxy Toys store. In the large hall on the ground floor, climb into the « space capsule » and take the green rail to go up to the very top of the store. You will find a chest containing the mini game of the classic kingdom « Mickey Cuts Up ».

→ Get the Taxi Troubles mini game :

In the world of Toy Story, go to the first floor from the store’s ramps (the orange rail) and go to the miniature store (action plus+). You will find a conduit that leads to the dolls store. After passing the ventilator through the conduit, you will find a box containing the mini game « Taxi Troubles ». The treasure chest is right next to a save point !

→ Get the mini game The Barnyard Battle :

In the world of Toy Story, go to the second floor and go to the playground for young children. At the bottom of the area, you can enter coloured cubes. At the very top of these cubes, you can enter a tube, slide inside and immediately go to the left to find a large chest that will allow you to unlock the mini game of the Gummiphone « The Barnyard Battle ».

→ Unlock the mini game of the classic kingdom The Wayward Canary :

In the kingdom of Corona (Raiponce), you will find a large chest containing the mini game « The Wayward Canary ». To find it, you must have crossed the swamp and reached the Wildflower Clearing part of the forest. That’s where the treasure chest is. At the place where Raiponce tries to approach blue birds when you first pass through this area. Note that there is a save point at the Wildflower Clearing, so if you have already visited the place before you can teleport from another save point directly.

→ Get the game Camping Out from the classic kingdom :

In the world of Raiponce, the kingdom of Corona, you will find a large chest in a cave while walking through the area of the forest – hills. You will unlock the classic kingdom’s mini game « Camping Out » by opening the trunk inside. The cave is not far from the place where you can reach the Raiponce tower.

→ Get the The Karnival Kid :

In the world of Raiponce, the kingdom of Corona, go to the area of the kingdom / Thoroughfare, very close to the entrance where there is the MOG shop, there are villagers talking in front of a treasure chest, approach the barrel in front of them and use the « entertain the gallery » command to get them to applaud you and move about. You can open the trunk behind them that contains the « The Karnival Kid » mini-game for the classic kingdom function of your Gummiphone.

→ Get the How To Play Golf game for the Gummiphone :

In the kingdom of Monstropolis (Monsters, Inc.), you will get the mini game « How To Play Golf «  from the Gummiphone by visiting the factory. You will have to go through the crashed machine area and climb to the first level. One of the corridors in this area will allow you to go down into a closed room on the lower floor. This is where you will find the big chest containing the mini golf game.

→ Get the Mickey’s Circus mini game for the Gummiphone :

In the kingdom of Monstropolis (Monsters, Inc.), you will have to hit a red container from the sky to access the chest containing the mini game « Mickey’s Circus ». The chest is in the Power Plant Tank Yard, you will have to climb up to the top area and jump down to the bottom to hit the red container with a diving attack to be able to break it. If you miss your shot, you can go up to the top with the hook.

→ Unlock Barnyard Sports for the Gummiphone :

In the world of Arendelle (Frozen), when you are in the ice maze in the lower level area where there is the Mog Shop and the save point. Make a targeted shot on the ice pillar on the right to perform a spin attack (agility) which will rotate the ice in the room. You will be able to access a small room that will allow you to open a safe and you will get the mini game of the classic kingdom « Barnyard Sports ».

→ Get The Klondike Kid :

From the save point of the North Mountain Gorge (Arendelle / Frozen) at the same place where it is possible to enter the ice maze, go down the hill, halfway you will see a passage on your left you just have to jump down below. When you fall, finish with a diving attack to break the big ice crystal, which will allow you to find a hidden treasure chest containing the mini-game « The Klondike Kid ».

→ Get Mickey’s Kitten Catch for the Gummiphone :

In the world of the Frozen (the kingdom of Arendelle), you will find a large chest containing the mini-game « Mickey’s Kitten Catchs » for the Gummiphone. This chest is located next to a large rock in the area of the North Mountain Snowfield.

→ Unlock Fishin’ Frenzy for the Gummiphone :

→ Unlock the mini game Cast Out To Sea for the classic kingdom :

In the Pirates of the Caribbean world (Jack Sparrow), sail with the Leviathan to Isla Verdamontana not far from the abandoned island where there is the Mog Shop (top left on the Caribbean map). You will have to climb the whole island to be able to make a diving attack on the crate marked with a big cross. By breaking this box, you will access a chest that contains the mini-game « Cast Out To Sea » for the Gummiphone.

→ Where to find the Beach Party game :

In the Pirates of the Caribbean world (Jack Sparrow), sail with the Leviathan to the confinement island. On the surface, the island looks like a large empty rock, but as you walk around it you will find an entrance that will allow you to retrieve the contents of a large chest. Inside you will find the mini-game « Beach Party ».

→ Where to find the Mickey’s Prison Escape game :

In the Pirates of the Caribbean world (Jack Sparrow), disembark at Port-Royal and head to the port area. In front of the save point, you will see an access that allows you to go to the cells by going down the stairs… In one of the cells, you will find a large chest that will allow you to unlock the mini-game « Mickey’s Prison Escape » for your Gummiphone.

→ Where is the mini game How To Play Baseball of the Gummiphone :

In the world of Big Hero 6 in the city of San Fransokyo, you have to climb onto buildings to find a big chest that contains another mini Gummiphone game. The trunk is located under the red and white tower (Tokyo Tower) and will allow you to unlock the « How To Play Baseball » mini-game.

→ Get the Mickey’s Mechanical Man :

In the world of Big Hero 6 in the city of San Fransokyo, on one of the city’s buildings you will find a chest containing another mini game of the classic kingdom for the Gummiphone. It is the « Mickey’s Mechanical Man » game, it is located on the outskirts of the city in the central district (near the north district), you can see the large building with blue lights on the left of the chest.

In the world of the Big Hero 6 (San Fransokyo) go to the south district, near the building with the blue lights, where the paving stones are grey with red stripes, there is a advertising pillar to destroy by making a dive smash by taking height. You can start from the highway above you or from a building. You will get the game « Mickey Steps Out » for your Gummiphone.

Getting all games from the « Classic Kingdom » section of your Gummiphone will be required if you intend to unlock the « Muscle Memory » and « Classically Trained » trophies / achievements that require to get a new high score in every Classic Kingdom game.