In the new Tom Clancy’s The Division 2 (developed by Massive Entertainment teams), you play as an agent of the Division. Your goal is to save Washington D.C. and restore order following the pandemic that hit the city. So you will have to evolve and survive in a hostile and post-apocalyptic world where criminal groups have formed… Their names? The Hyenas, the Outcast or the True Sons. To help you become a much more effective Division agent in the field, we’ve put together no less than 10 tips and tricks for you to discover as you read more.

Tip 1 – Search everything, everywhere, and explore the map :

It may seem stupid to you, but you could miss out on a lot of more or less important things if you’re satisfied with the basics, i. e. running to the main missions of the game without worrying about the rest. The city of Washington D.C. is vast, very vast… And it is full of secondary things to do and places to search that will allow you to obtain the maximum resources. These resources will be very useful when you unlock the White House workstation. You can make weapons, accessories, mods and equipment in general… And to be able to access all this you need various plans and resources that are mainly obtained by finishing the side of the game… Think about it when you walk the streets of Washington D.C.

Some safes can only be opened with certain specific keys… If you have trouble getting your hands on these famous hyena keys and others, it’s because you missed something in the game. It is not by destroying the enemy that you will obtain these famous keys, but thanks to the exploration of Washington D.C. as we explained in the first of the tips dedicated to The Division 2. A small clue, the keys are obtained mainly by searching the underground areas of the city. There are several districts in Washington D.C. and each district has its own underground network. Take a look around and you’ll be sure to find keys for The Division 2’s special safes.

☆ Note that we have published a guide on the different keys of The Division 2 and how to get them. If you want to know everything about them, consult this page : . 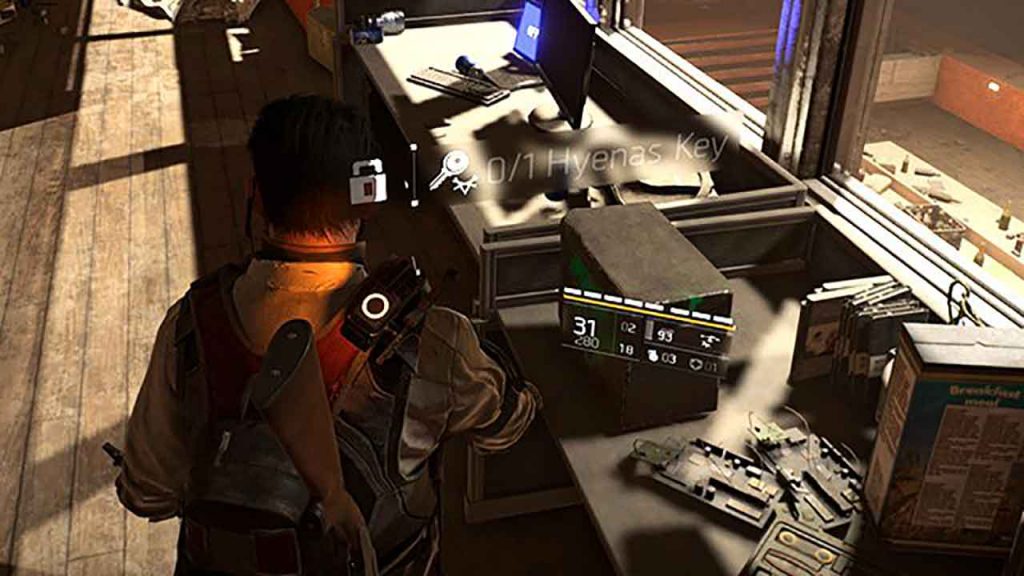 If you have trouble with money (e-credits) to buy things at different points of sale, it’s because you didn’t understand that you could make easy money by selling your trinkets. By looking around every corner of Washington D.C., you will not only find resources, but also all kinds of trinkets that are strictly for nothing more than to be sold to the city’s various merchants.

When you talk to a merchant (White House, Theatre, etc.) switch to the « sell » tab and be aware of the different options available to you at the bottom right of the screen. You will see that you can choose to sell your trinkets… Do it without fear and you will sell everything that is useless in your inventory, which will earn you e-credits the currency used in The Division 2 game.

You are undecided about the fate of your items and equipment that you don’t use… Is it better to sell or dismantle unnecessary things in The Division 2 ? The answer is « do nothing » without making sure you don’t have any ongoing projects. Whether at the White House, the theatre or other survivor camps in Washington D.C., you have the opportunity to consult the various projects underway.

These projects require actions on your part to be finalized and some require you to make donations, such as donations of many pieces of equipment. Before dismantling or selling, take a look at the people who manage the different projects in Washington D.C. and make sure you don’t have any donations to make, this action will be much more useful than dismantling your equipment parts for a few resources.

Tip 5 – Have you noticed the decoration / distinctions tab… No ?

You can easily miss it… At the same time, The Division 2’s menu is so full of things that it can become difficult to find your way around.  It’s hidden in your character’s menu, and you can easily miss this aspect of the game… We’re talking about challenges that offer you in return decorations to apply to your agent !

Open the progress menu and switch in the different tabs to see the different combat, tactical, discovery and other challenges. There is a whole list of tasks to complete that will allow you to unlock decorations that you can apply to your agent’s arm in addition to obtaining « third party » rewards through commitment awards, resource distribution merits or gutter rewards. 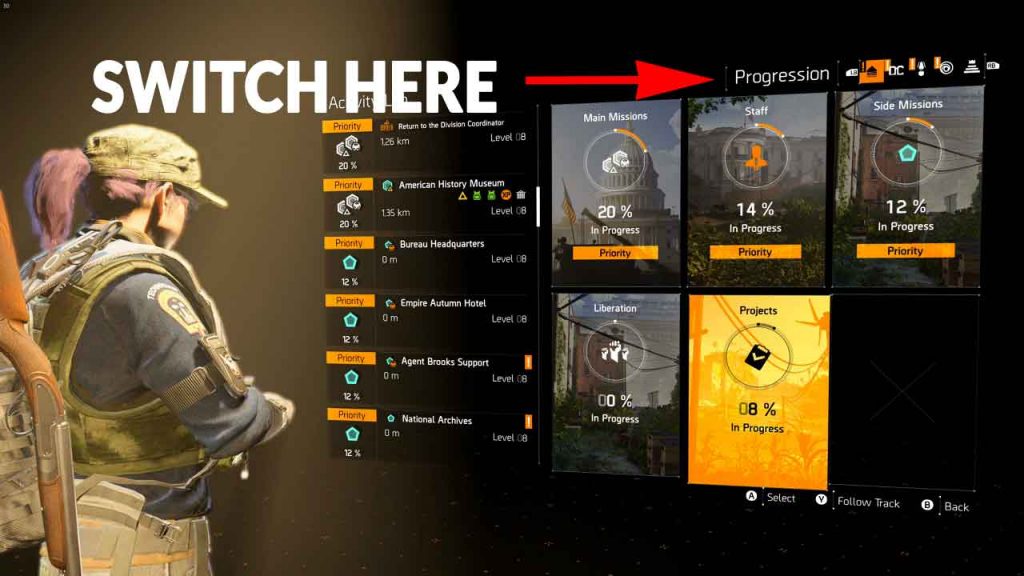 You may not know it, but loot boxes, key caches and other search items reset over time. Every 24 hours, there is a reset on the game’s servers so that you can reopen what you already opened by walking the streets of Washington D.C. and thus retrieve the rewards that will have been set to your new agent level at the same time. And it also works for the famous hyena keys, outcasts and others!

Tip 7 – Grenades are your true allies :

Grenades are very useful in The Division 2 and especially to surprise a group of unsuspecting enemies in the middle of a discussion. The effect area of your grenade shows you if you are going to hit the target or not so take the time to hit as many enemies as you can… If you don’t hit anything, the effect area of your grenades will be orange, but it will switch to red and highlight the affected enemies if they are in the effect area. Think about it when you’re about to throw one or two grenades at a group of hyenas or outcasts. 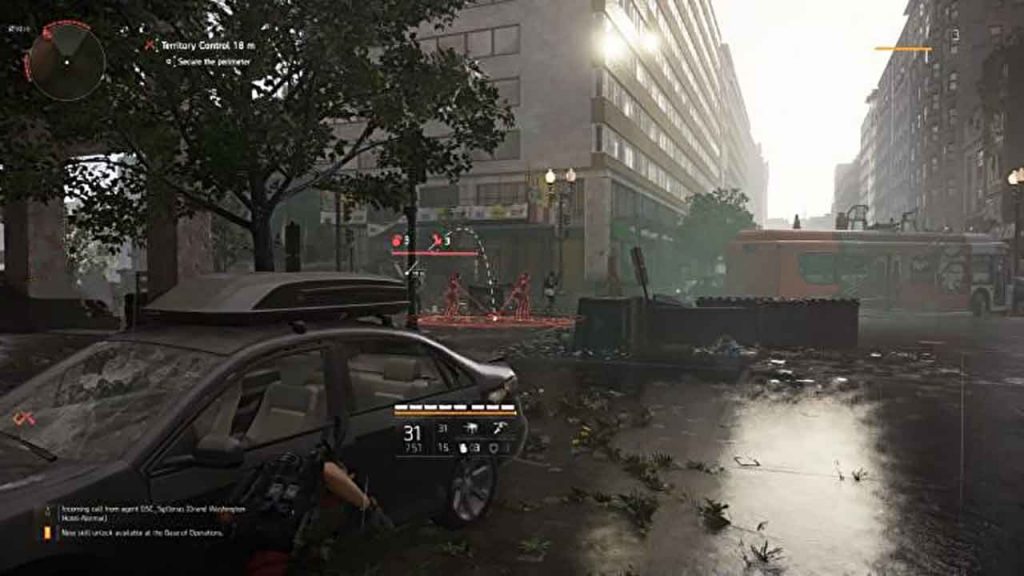 Tip 8 – There are lots of fast travel points to unlock in Washington D.C.:

Outside the White House and the theatre you can unlock a lot of fast travel points by walking through the streets of Washington D.C. Every time you unlock a hideout in a district then he can be used as a fast travel point. But not only that! When you finish a main mission, you can then use its location as a quick travel point as well as all checkpoints in the different Dark Zones. Open your map as often as possible and use the many points at your disposal to travel faster through the different districts of Washington D.C.

Well, you will have understood, taking cover in The Division 2 is very important to hope to survive against hyenas and other groups of organized enemies who leave you no respite… But did you notice that you could also make rolls? With this coverage system and frenetic action, it is easy to forget that our agent can execute a roll to get out of a bad situation. But the real trick is that doing a dodge roll can cancel the animation of reloading a weapon, and with good timing can give you a complete reloading of some weapons. Bug or no, we don’t know, but think about it next time!

Tip 10 – Everyone is at the same level in the Dark Zone :

The Division 2 Dark Zone is the most risky area… The AI is no longer the only danger since you may meet other agents controlled by real players who may be tempted to click a little too easily on the button to go from a nice division agent to a bad rogue agent. A rogue can kill you, which makes him a bad guy. Always be on guard in the Dark Zone, any presence around you may be hostile at one time or another. You have no allies and even fewer complete strangers who will shoot you in the back at the slightest opportunity. But don’t be afraid, because the equipment and levels are standardized in the Dark Zone which means that everyone has the same hitting power and the same defensive statistics no matter what equipment is used. The equipment has no advantage in the Dark Zone!