When you reach on the chapter 2-4 of Ni No Kuni 2, chief Batu’s daughter Tani will offer to escort Evan and Roland to the cradle of light, where the young prince is supposed to make a pact with the guardian (Kingmaker) of the place.

If you are having trouble for finish the Kingmaker’s trial in Ni No Kuni 2 then this guide is for you ! Following the article and you will find all the steps to complete the trial of knowledge of the cradle of light. For each course, we will show you the optimal path to get all the blue spheres. These spheres make improve the rewards when you finish a course of the trial of knowledge.

How to finish the trial of knowledge in Ni No Kuni 2 :

As you will notice when reading the texts of the story before each of the courses of the trial of knowledge, some parts appear in colour and notably the important elements of the story which are represented by statues on the different puzzles.

Each time you will have to reconstruct the story correctly by going through a precise path. Never forget that when you decide to advance, you cannot retrace your steps… Some statues will have to be turned in the right direction to respect the course of history and blue spheres will have to be recovered to obtain better rewards at the end of the each puzzles.

Follow the precise path of the three puzzles below and you will finish the trial of knowledge in no time and with the best rewards.

Ni No Kuni 2 the complete guide of the trial of knowledge – the beginnings :

→ Synopsis of the first puzzle :

Once upon a time, the world was ruled over by an evil dragon possessed of terrible power. A little boy from a little village, determined to rid the world of the dragon’s misery and bring happiness back to all, set out to defeat the beast. At his touch, the magic wand handed down by the people of his village stirred to life. And thus he was granted the power of sorcery. Drawn by the call of the wand, a fairy came to the boy and befriended him. Together, the two of them set out on a great journey to save the world.

Start by moving forward on 8 squares towards the statue of the little boy (blue) and stop at the foot of the statue. 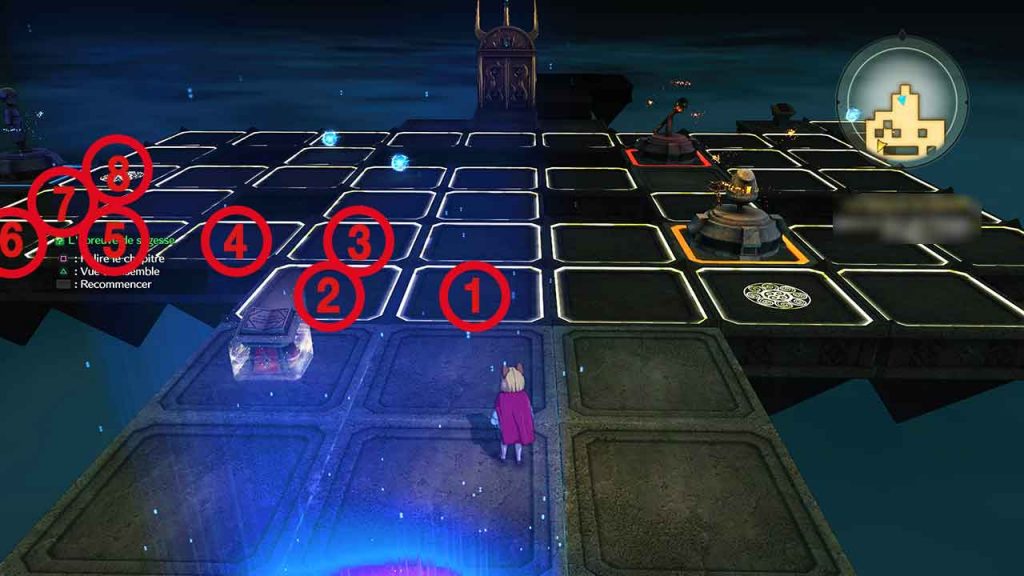 Continue on your way towards the first blue sphere and advance 8 squares until you find yourself in front of the statue of the magic wand (red). 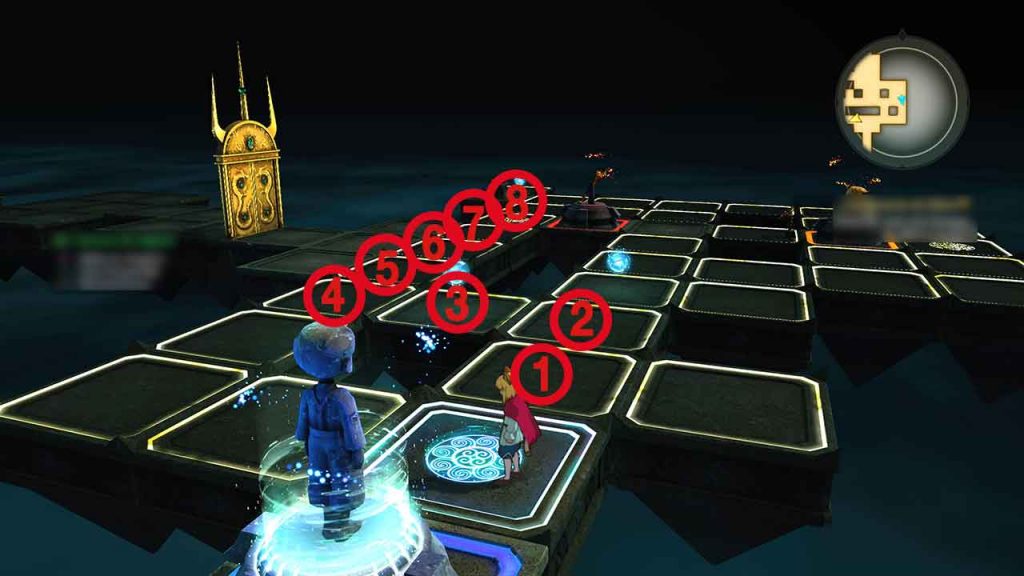 Now move forward 5 squares and place yourself behind the statue of the fairy (orange) that we will turn in the right direction. 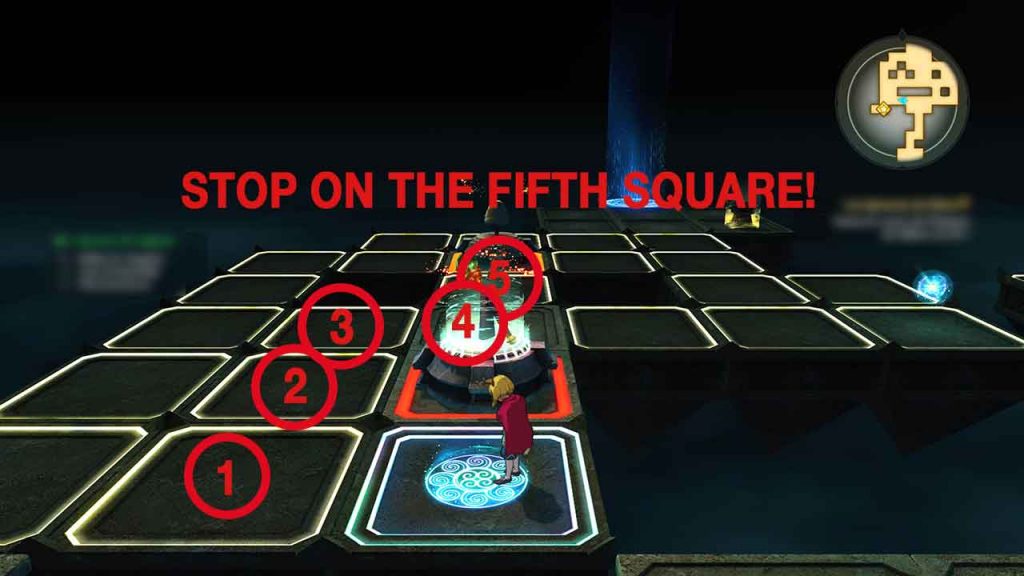 Turn the statue of the fairy (orange) so that it looks in the opposite direction, so that it is turned in the direction of the magic wand (red). 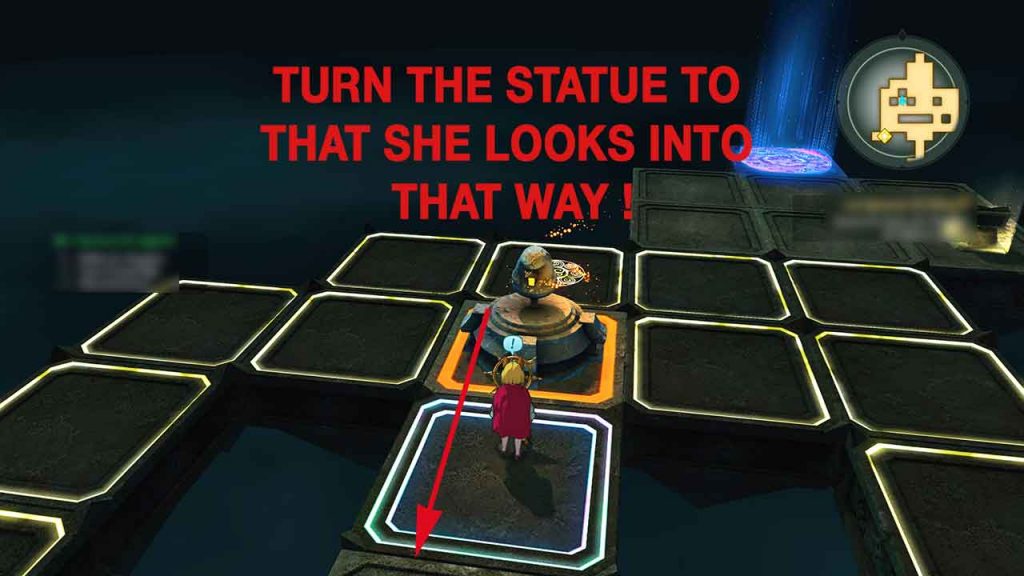 Then walk to the next blue sphere and advance 6 more squares until you are just in front of the statue of the fairy (orange). 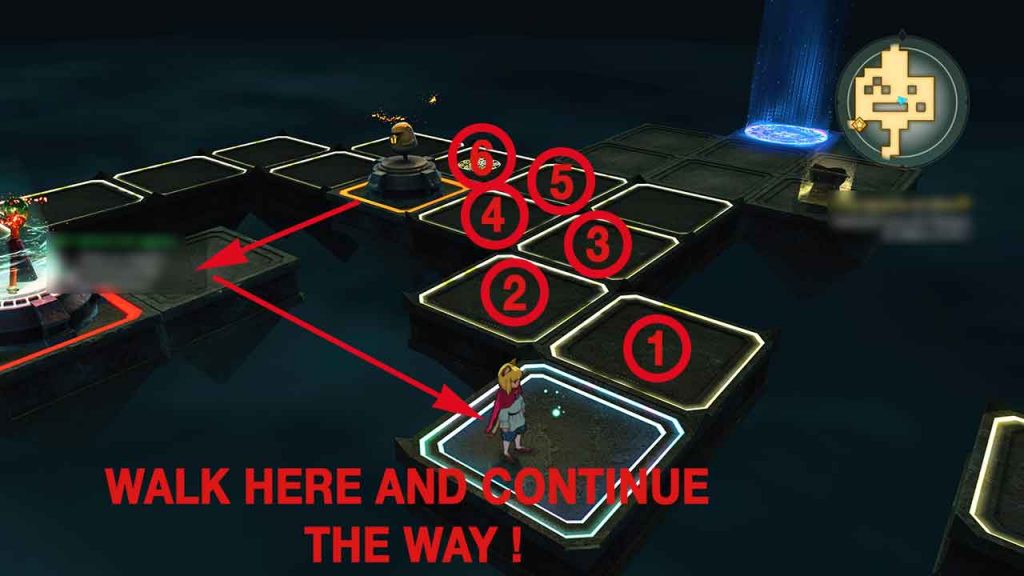 All you have to do now is walking towards the stele to validate the story, but don’t forget to recover the blue sphere before interacting with the stele of the story ! 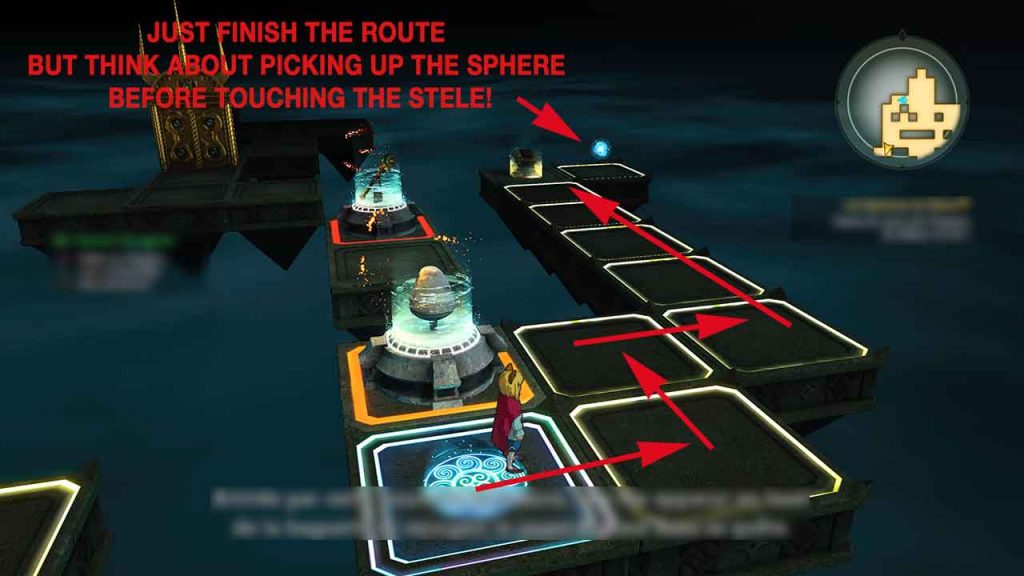 The rewards to be obtained in the first puzzle of the trial of knowledge :

Ni No Kuni 2 the guide of the trial of knowledge – Foregatherings :

→ Synopsis of the second history :

Guided by his friend the fairy, the boy roamed the land, and gathered together a band of faithful companions. The first was kind-hearted harpist, whose magical melodies could soothe even the fieriest soul. The second was a brave pistolier, ever ready to held his friends through any hardship they might face on their quest. The third was a wise wizard, who took the boy as his apprentice, and taught him all he knew of the ways of magic. His party of heroes thus assembled, the boy found the courage at last to face the monsters that troubled the world. And so, he and his companions set out to battle them wherever they might be found. 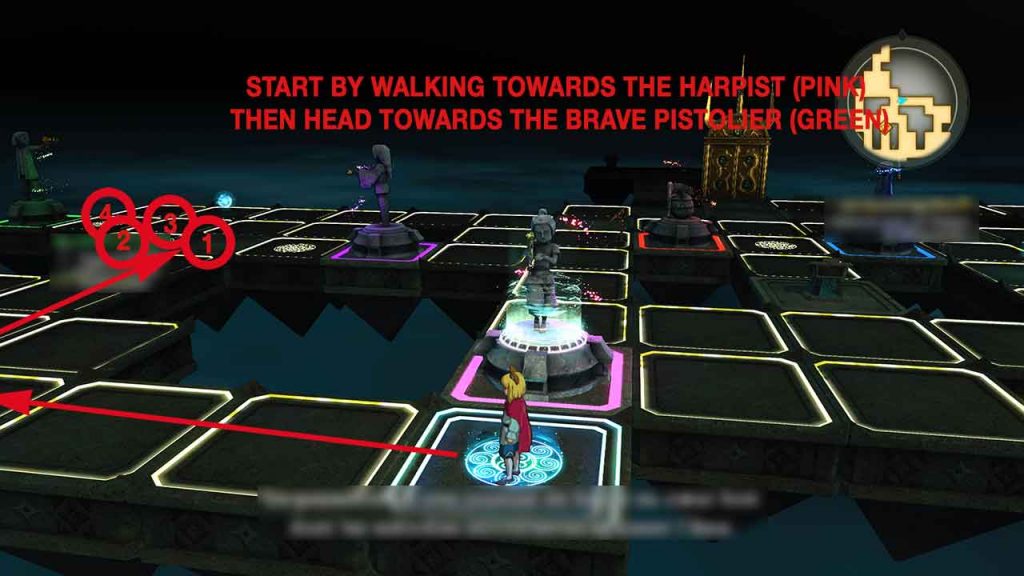 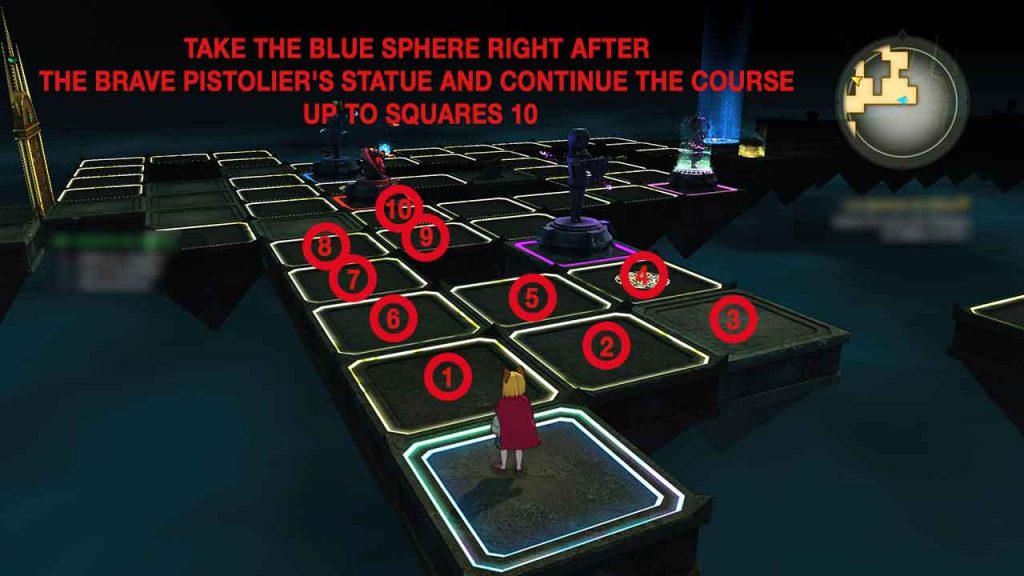 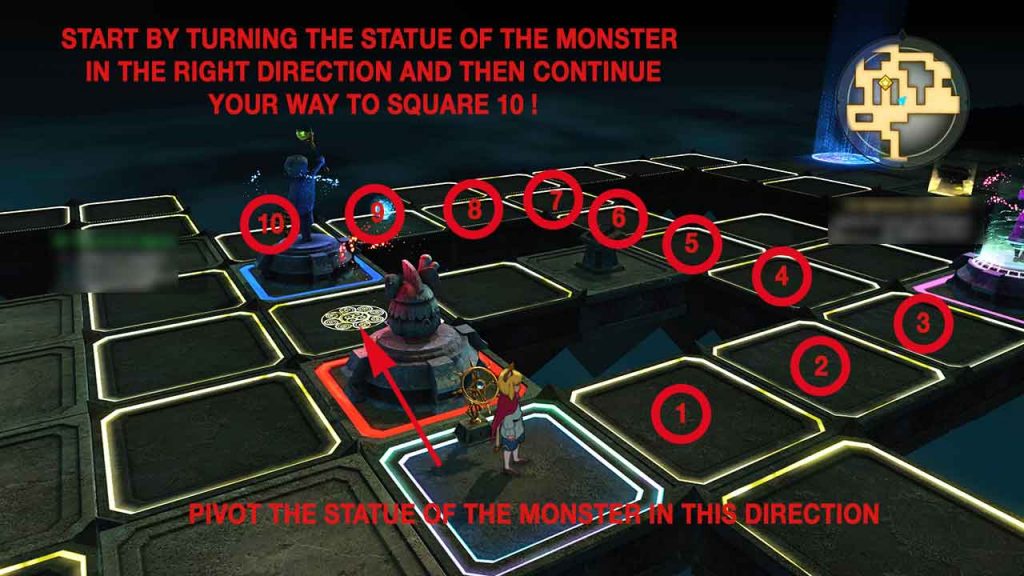 Turn the statue of the boy (blue) so that it faces that of the monster (red) then finish the course by walking up to the stele which will end this second puzzle. 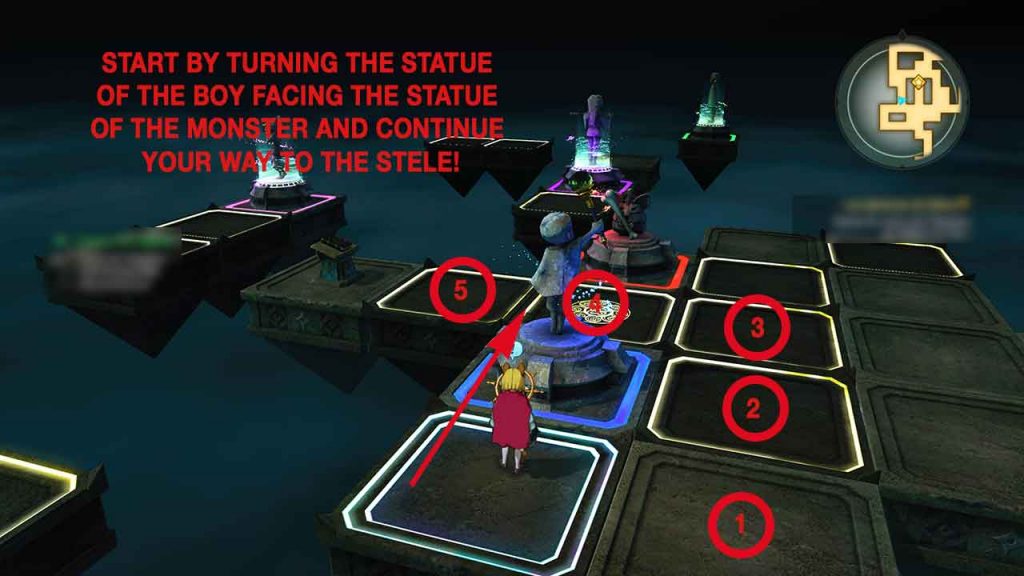 The rewards to be obtained in the second puzzle of the trial of knowledge :

Ni No Kuni 2 the guide for the trial of knowledge – Endings :

→ Synopsis of the third round :

The evil dragon who ruled over the world could not be defeated until the four towers emitting the evil aura that protected him had been destroyed. The first tower looming in front of him, the wizard laid it low with a mighty spell. The second was close by the pistolier, who carefully took aim, and felled it with a single shot. The third was sent toppling when the harpist turned to a soldier and spurred him on with her songs. The fourth tower, which stood in front of the fairy, was flattened when he ran into it head-first as fast as he could ! His towers gone, the dragon was vulnerable at last, and the final battle began in earnest. As the fight between them raged, the boy spied his chance when the dragon turned to face him, and let loose the legendary spell Mornstar. It struck the dragon, who fell down dead? Thus, the world was saved, and all lived happily ever after.

To pass this third test of knowledge, start by directing yourself towards the wizard (purple), pass in front of the statue to destroy the first tower by advancing 13 squares until the wheel which will allow you to pass to the following stage. 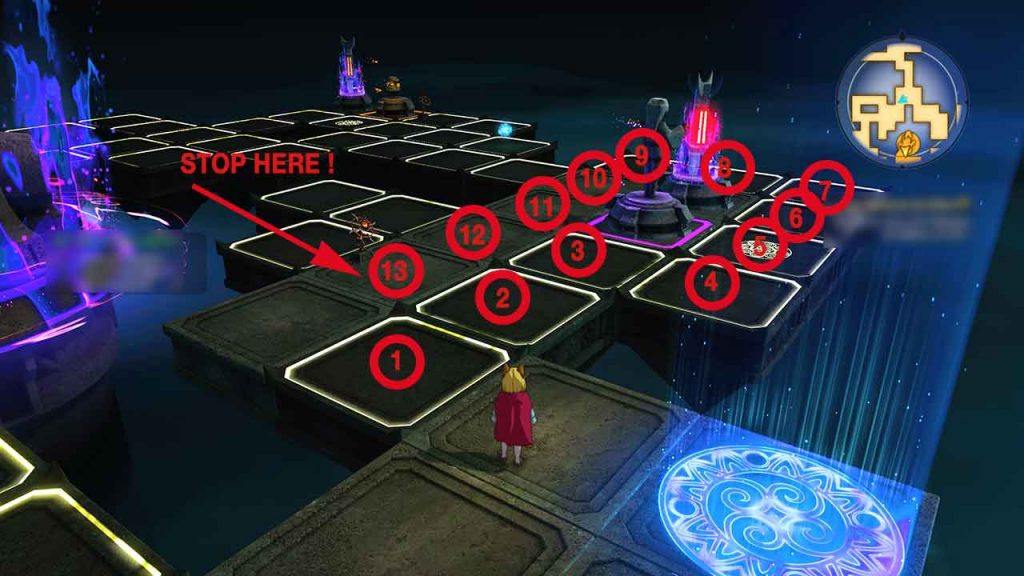 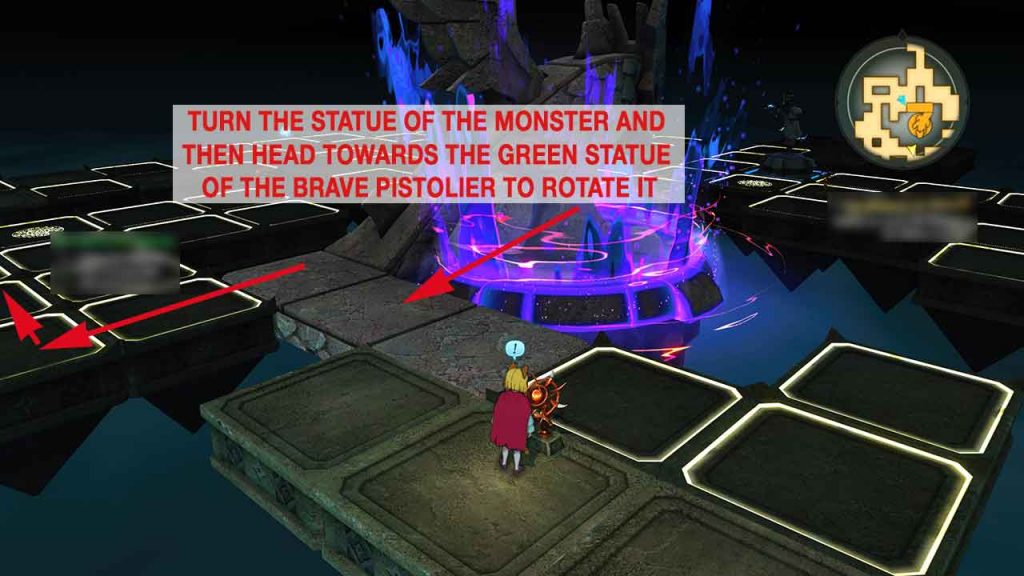 Make sure that the look of the statue of the pistolier (green) is towards the next tower. Then move forward 4 squares by walking on the bright symbol of the pistolier’s statue (green) and stopping at the next wheel that will move the dragon again. 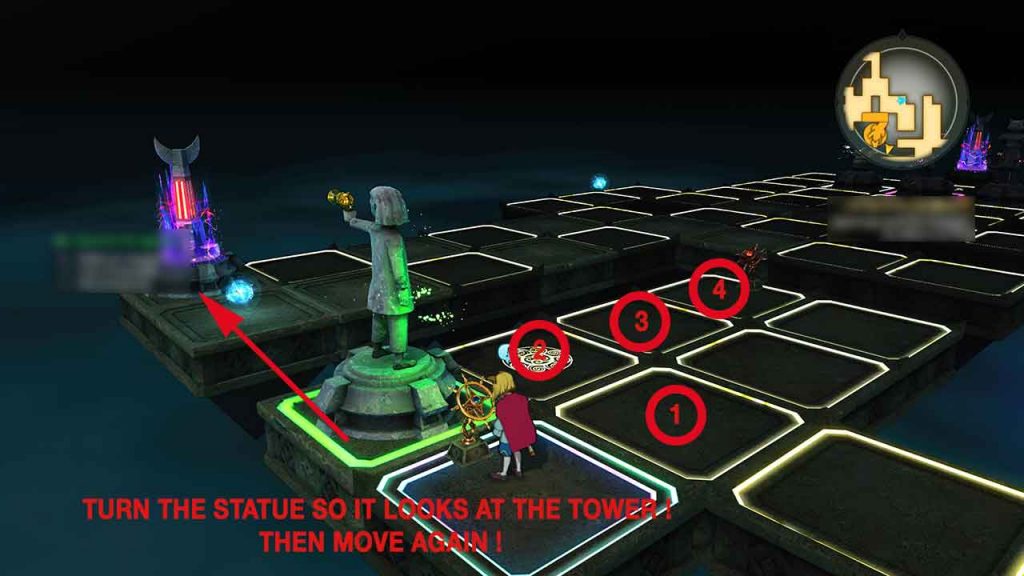 Rotate the dragon to create new platforms that will allow you to move 6 more squares. Take a good look at the map below to get to the right squares and stop at the 6th. 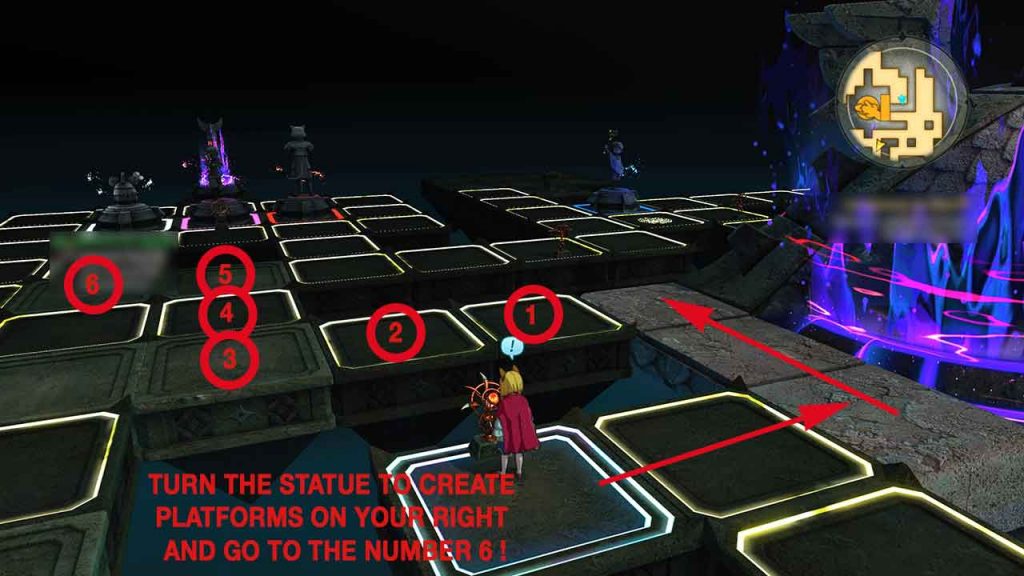 Then move forward again 3 squares and stop in front of the statue of the harpist (pink). 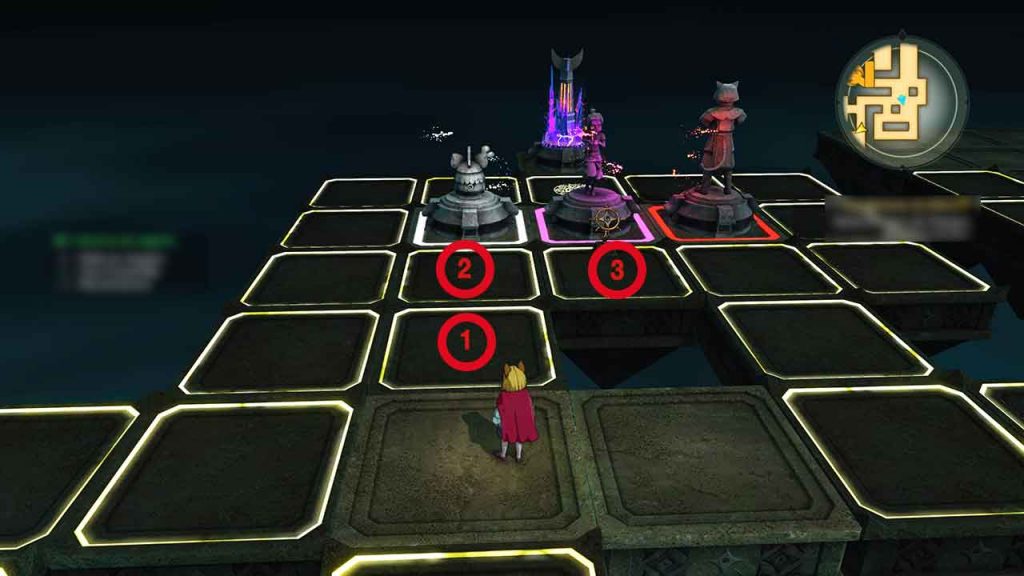 Rotate it so that it moves in the direction of the statue of the guard (red) and advance until the luminous symbol which is on the other side of the harpist (pink) by advancing of 6 squares. 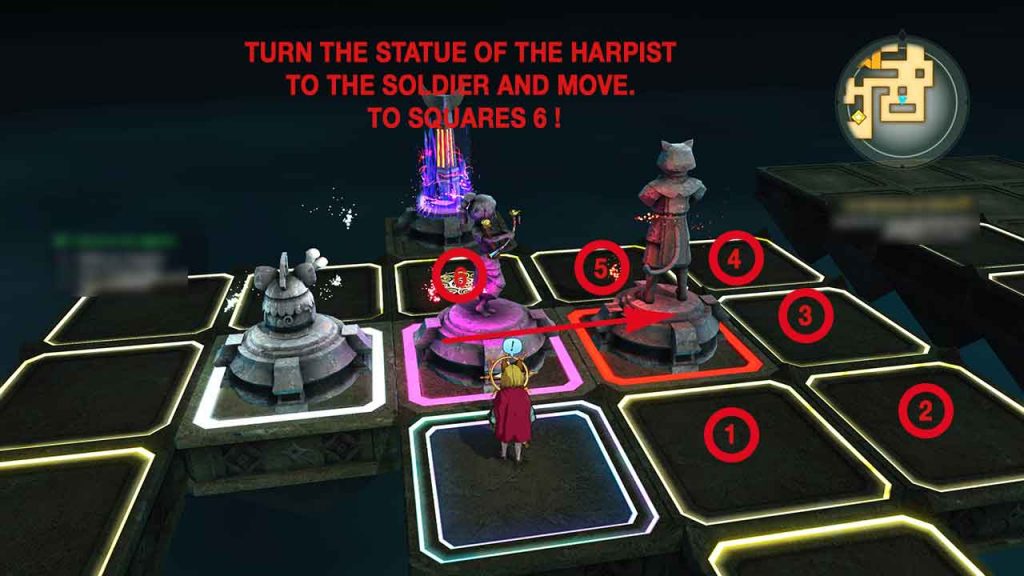 Then follow precisely the path of the screenshot below, making sure you get the two blue spheres on your way to get the best reward at the end of the course of the knowledge trial and stop just at the wheel that turns the dragon with the evil purple aura. 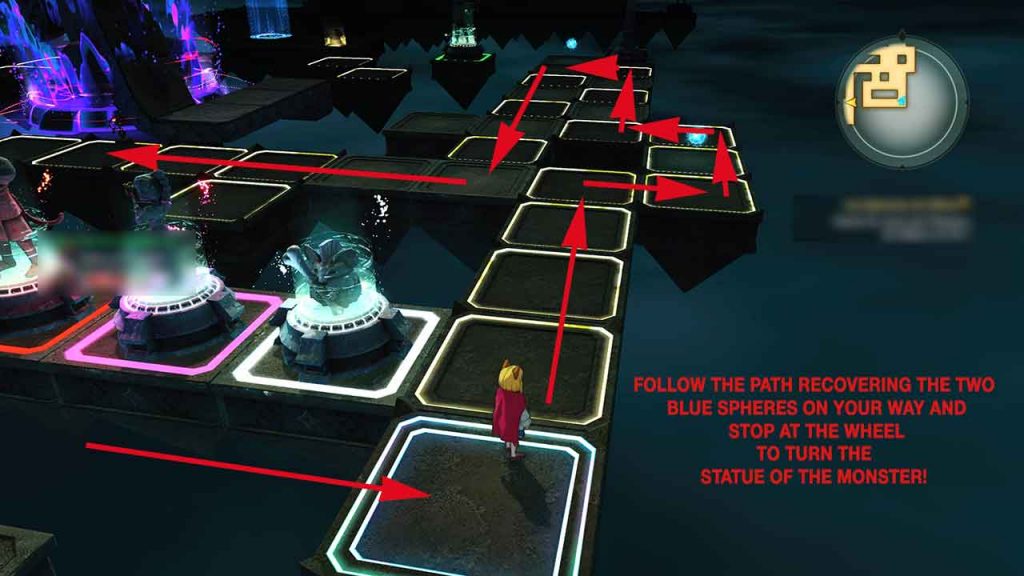 Rotate the dragon so that Evan gets platforms that will allow him to advance 5 more squares. 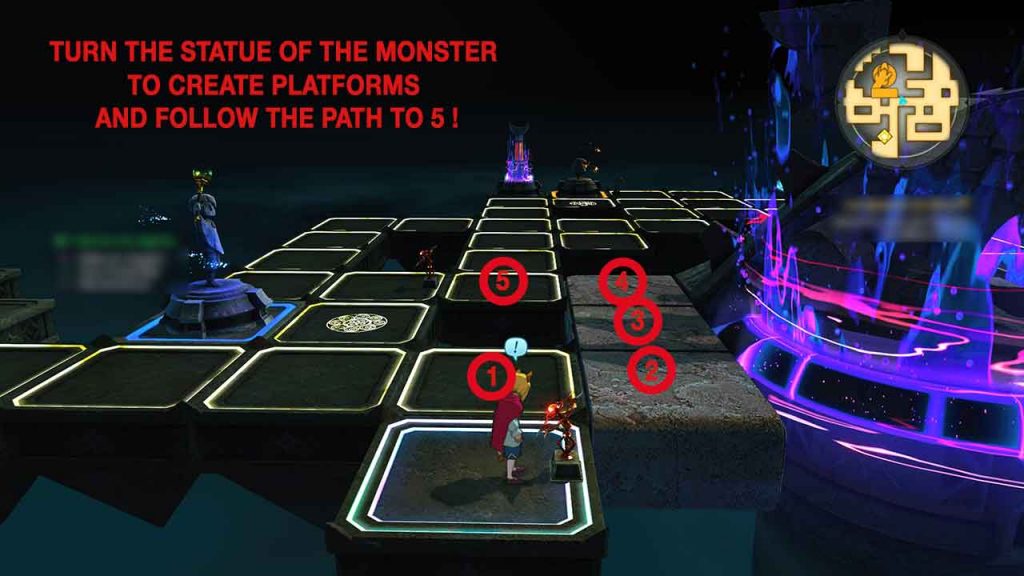 Then continue your way up to the wheel of the statue of the fairy (orange) by moving 11 squares and make sure to take the blue sphere well on your way. 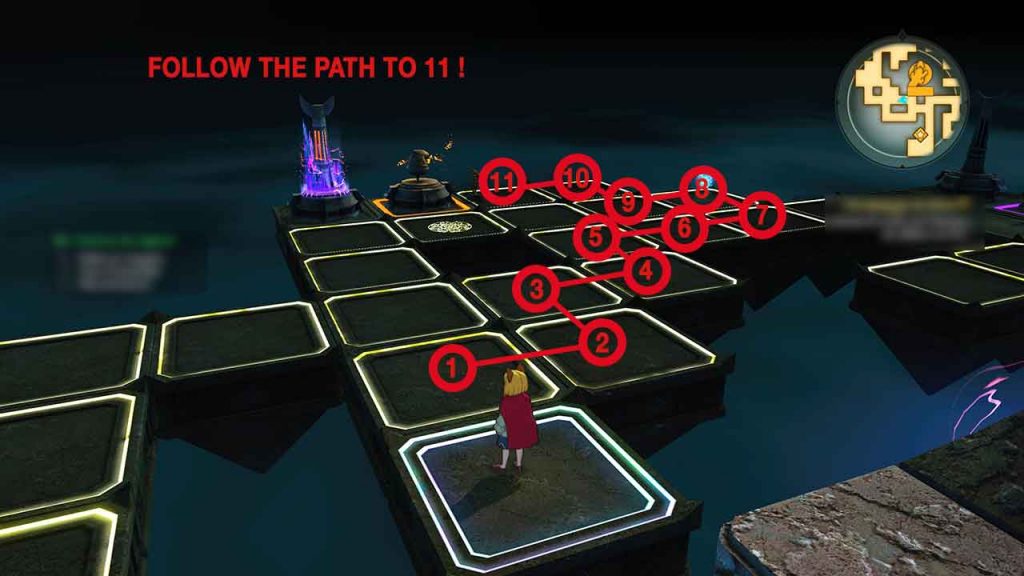 Then rotate the statue of the fairy (orange) for which puts a strike to the last pillar when you pass over the statue’s light symbol by moving 11 more squares until the next wheel. 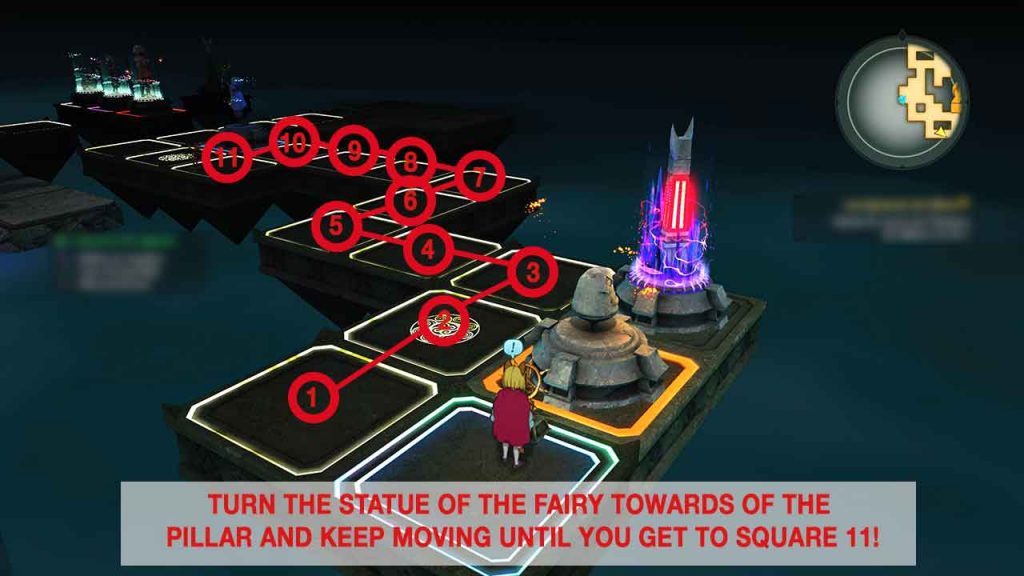 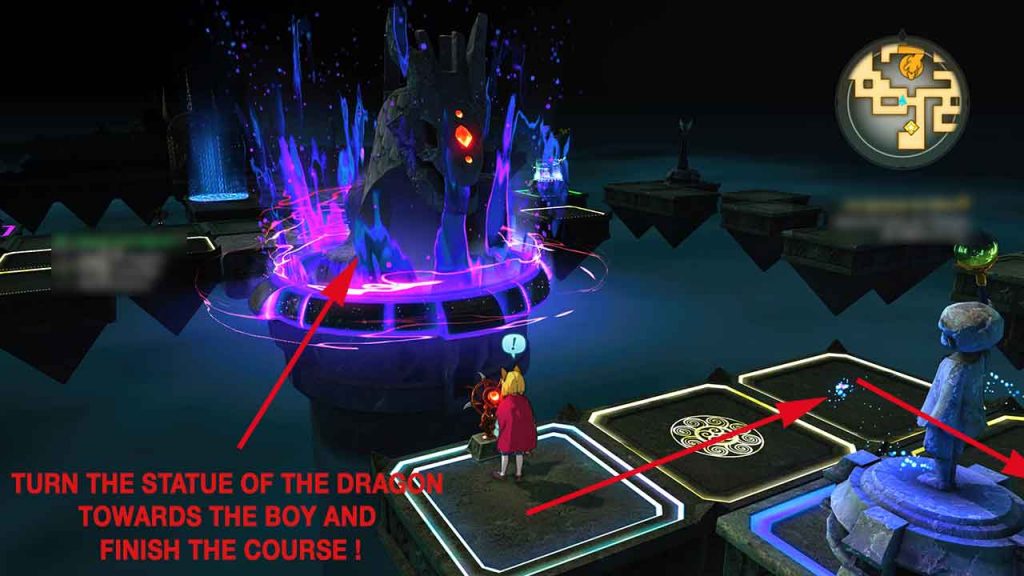 At the end of this last puzzle, you will receive new rewards, the trial of knowledge will end and Evan will fight a boss during the trial of courage.

The rewards to be obtained in the third puzzle of the trial of knowledge :

How to finish the trial of courage in Ni No Kuni 2 :

Nothing extraordinary, the trial of courage will force you to fight Thogg (the Monstrously muscled mettle-tester), an opponent who is not very powerful and that you should eliminate easily enough. In any case, at the end of the trial you will be rewarded with a Boss’s Boots and Evan will finally be able to make a pact with the kingmaker Lofty. This will allow the team to begin building a new kingdom.