We are only a few weeks away from the launch of The Division 2… The game is planned for Xbox One, PC and PS4 as of March 15, 2019. To be patient, players will be able to enjoy totally free access to the game’s beta. No need to pre-order, no need to have an access key, just download the game (at least the trial version) on the platform of your choice to enjoy it for an entire weekend.

The content proposed by Ubisoft’s teams for this test session is relatively attractive and will give fans and newcomers a good idea of what Tom Clancy’s The Division 2 has to offer in terms of main and side activities with single player and multiplayer content. We will show you in detail below the content of this trial version. For now, let’s look at the start and end dates of The Division 2’s open beta.

When does The Division 2’s open beta start and when does it end (the dates) ?

The open beta will start on a Friday and will certainly be entitled to a pre-download to allow everyone to be ready for the launch day of this trial version of the game. Here are the start and end dates for the open beta :

What is the content / missions and activities available in the open beta of The Division 2 ?

On the program, single-player missions, multiplayer cooperative missions or even players against players, with an « end game » mission at the end. 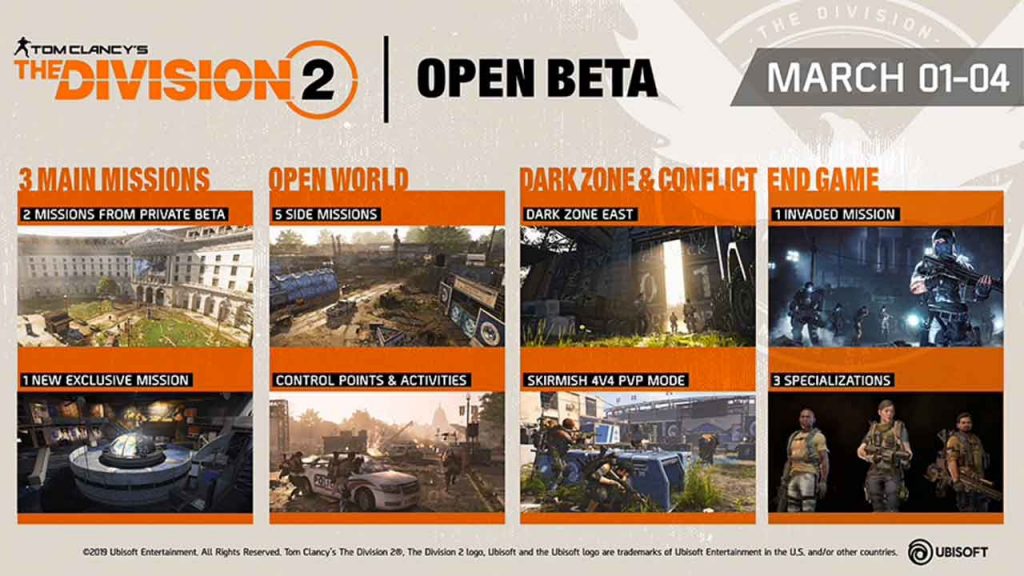 tips guides and wiki the division 2
Share. Twitter Facebook Pinterest LinkedIn Tumblr Email
Previous ArticleGuide Resident Evil 2 Remake – what are the conditions to get the S+ rank (how to get the best ranking) ?
Next Article Pokemon Go anniversary event to get Pidgey and Rattata shiny and flower crowns