Stealth Camo is an object that allows you to be totally invisible, it’s a special item that is available in most of the Metal Gear license games. In Metal Gear Survive this object is also present, it’s a skill to unlock in one of the sub class of the game.

These four sub class are obtained at the very end of the game. If you plan to get the Stealth Camo before the end of Metal Gear Survive this will not be possible. However, if you have defeated the Ash Lord, you complete the first condition to unlock the four new sub classes, Assault, Jaeger, Medic and Scout in the skills trainer. It is these sub classes that will allow you to unlock the skill of Stealth Camo. Here is the guide to becoming invisible in Metal Gear Survive.

How to be invisible with Stealth Camo in Metal Gear Survive :

As we told you just before, you will have to first beat the Ash Lord and see the end credits of Metal Gear Survive. After that, you will be back at the base and you will be able via the Wormhole Digger to launch an Base Camp Dig.

This mission will consist of pushing back the wanderers / zombies who are trying to enter the base until the countdown is over. Complete this mission for Virgil to tell you about a Morse code with target to rescue. Note that you must also be level 40 and have unlocked all your skills.

It is from here that you mustn’t be mistaken if you really want the skill that will make you invisible in Metal Gear Survive ! The levels of these skills are very expensive in Kuban energy so it is better for you to follow the steps carefully and not waste more time than it takes to get the Stealth Camo.

The preferred class is therefore the subclass of the scout. It is this subclass that has the skill of Stealth Camo. You will need to increase the scout to level 5 in order to unlock the invisibility ability.

→ Here is the number of Kuban energy to inject to raise the levels of the scout :

When you open the menu, you will notice that you are automatically at level 1 in each subclasses, so you will have to go up to level 5. At each level you will earn several skill points.

Remember to press the key on your controller ou keyboard to equip the sub class with your character once you reach Scout Level 5. next, switch to the skills tab and use 4 skill points to get the Stealth Camo. 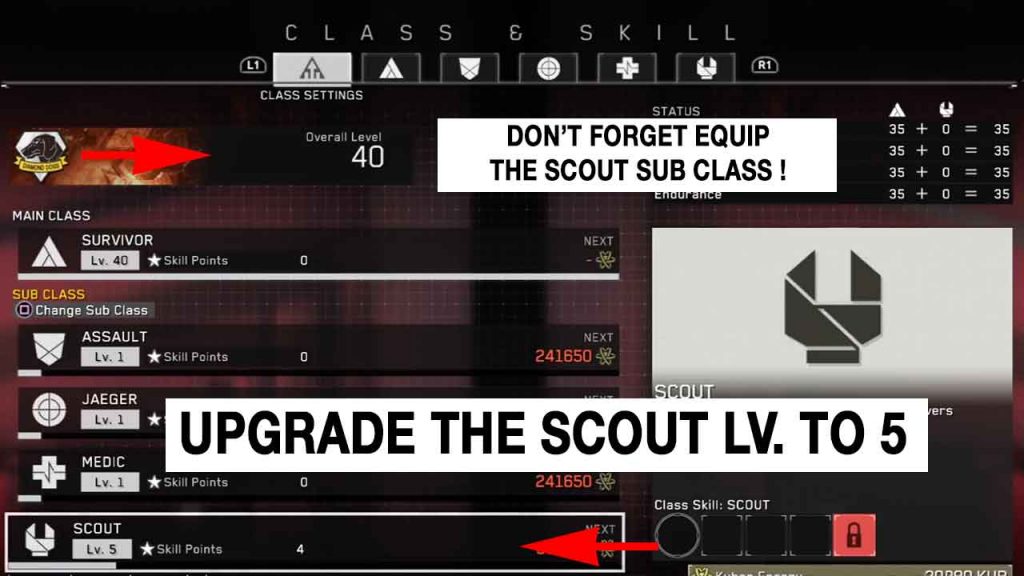 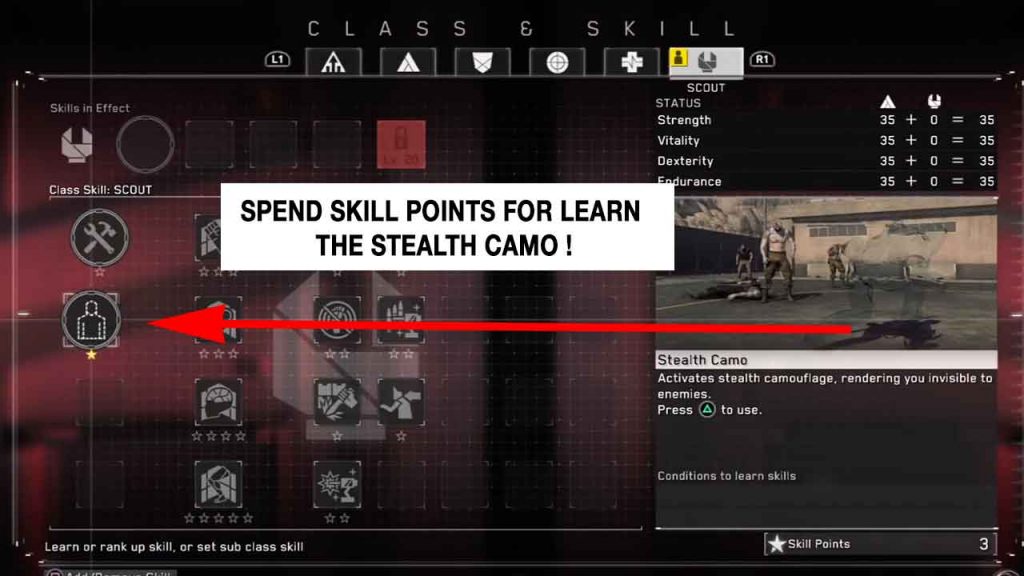 Keep in mind that your Stealth Camo is only active for a certain time, when its bar reaches 0% you should wait 1 to 2 minutes for the bar to fully charge. Stealth Camo will allow you to backstab any zombies, work well also with Mortar Zombies. In addition, you will be able to open all Metal Gear Survive containers and chests without being seen.

Note that even when using Stealth Camo you are still making noise, so enemies and animals can hear you, but not see you ! On the other hand, if you lie down on the ground and crawl, you will not make any noise and you will be invisible. Note that Stealth Camo is very convenient to easily kill Metal Gear Survive’s optional Big Mouth boss.